A comedy crime caper written and directed by Michael Cimino, Thunderbolt And Lightfoot is a bit of a strange beast, but also quite a delight. A light tone throughout allows the main players to have a lot of fun, even while (or even because) their characters spend much of their time antagonising one another.

Clint Eastwood and Jeff Bridges play the two titular characters, two men brought together by fate, and who then end up finding that they enjoy each other’s company. They may be able to work together to plan a robbery, a scheme that would make use of their dubious talents. Unfortunately, cramping their style are two men who want Thunderbolt (Eastwood) dead. Red Leary (George Kennedy) and Eddie Goody (Geoffrey Lewis) think that Thunderbolt screwed them over after a big job some years earlier. He insists that he didn’t, and maybe they will reconsider their need for vengeance if he allows them to help with the robbery that he and Lightfoot plan.

This may not be top-tier Eastwood, in my opinion, but it’s a surprisingly sweet, relatively lightweight confection that will certainly be enjoyed by anyone who considers themselves a fan of any of the main players. There’s never any real sense of urgency here, despite the planned robbery, because both Eastwood and Bridges play characters brimming with confidence in their own abilities. Kennedy and Lewis get a bit stressed, but that’s their own fault, all because they’re just not as good, and not as cool, as the leads. 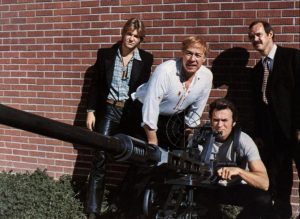 The cast all seem to be having a good time. Eastwood isn’t at his coolest, yet he remains cooler than you or I will ever be (with apologies to any genuine cool cats reading this). Bridges is all cockiness and a winning smile, and it’s a testament to the movie, and his performance, that he matches Eastwood in the star turn stakes. Kennedy and Lewis are alternately threatening and amusing, with the former being the genuine meanie while the latter seems to just be going along with what he thinks is the natural order of events.

Cimino would make, arguably, his masterpiece (The Deer Hunter)  just after this one, yet it’s hard to look at this movie and view it as the product of a first-time director. He has the confidence in the material and cast to let things unfold at a fairly sedate pace, trusting in the fact that viewers should, and do, warm to the characters and don’t mind spending time with them while the wheels of the plot turn slowly but surely towards an affecting finale.

Give this one a watch if you like buddy flicks. You may end up loving it.

Thunderbolt & Lightfoot both break into stores on 23/6/14 here in the UK.

How to Train Your Dragon: The Hidden World (2019) Film Review