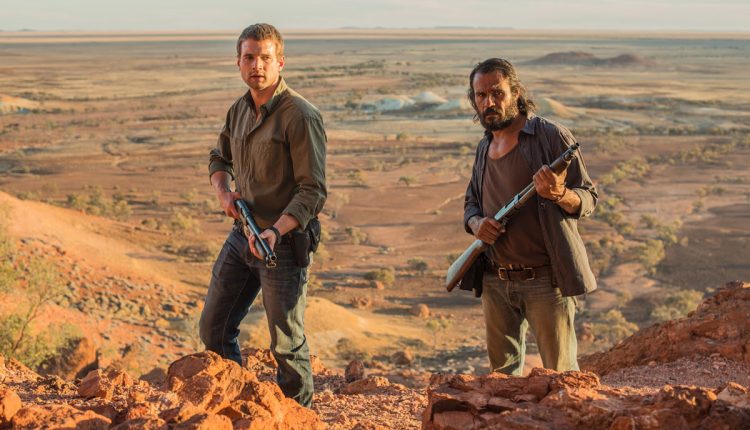 Dusty Australian countryside splashes across the screen in the opening shot of Goldstone. It’s big, imposing and a little sad. There’s a loneliness over the land, one created by geographical isolation and the chronic mistreatment of those who first walked there. Detective Jay Swan keeps a foot in two worlds, though in reality he’s not truly in either. An Aboriginal police officer stuck between his heritage and white society, we last saw him cleaning up his own small town in Mystery Road. That task proved bloody enough, but the stakes are higher as he walks through a continuation of his previous adventure only bigger and better.

While it’s a welcome return for Detective Swan (Aaron Pedersen), the intervening time has not been kind on him. Into that opening shot he drives, followed by a police car. He’s pulled over steaming drunk and locked up to dry out. We discover his daughter has died, presumably the cause of his return to the bottle. He’s been dispatched to look for a missing Asian woman mostly to get him out of the town he caused such chaos in previously.

In terms of structure writer/director (and editor, cinematographer and composer) Ivan Sen treads a similar path. There’s a victim no one thinks twice about, and a local community corrupt to its core, deep in the kind of dealing that might come under threat should a maverick detective pull loose threads. The differences are in style more than substance. The missing woman is Asian, not Aboriginal, and it’s a giant mining operation, one intent on grabbing land from the local Aboriginal community that wants no questions asked. There’s even a local bigwig (Mayor Maureen played by Jacki Weaver) in it up to her neck and another police officer, Josh (Alex Russell), the same one who pulled Swan over at the start, who begins bent and gradually sees the light.

That it doesn’t feel like regurgitated material is a credit to Sen’s writing. It’s not so much a copy as a continued exploration down avenues previously opened. Goldstone operates well as a crime thriller but it’s far more. Sen uses genre trappings to rip apart Australian society, exposing racial and gender rifts so insidious even the well-intentioned don’t act out of apathetic resignation. The line is clear: everyone’s happy when the economy booms; the economy is underpinned by mining; therefore, mining companies get what they need. It helps they operate out in the hinterlands with little in the way of oversight. If the workers, all men, get drunk and misbehave its fine to look the other way. If they want women, there are plenty to be trafficked in. If the company wants to expand, either money or violence will remove Aboriginal opposition.

Technically Sen keeps the same look as before. His shooting style cuts shots off just before their time. It creates a constant hunger for more. The best examples are aerial shots that pop up for a couple of seconds. They’re bold and beautiful, kept brief with the promise of repeats. Against this he maintains a steady pace, never rushing the scenes themselves. Conversations play out naturally and action happens slow enough to realise how terrifying it all is. Each bullet counts, landing with a crack and a puff of smoke. Then the next follows. Sen avoids turning it into a frenetic blur. The action, as Swan takes on the mining company, is as good as Mystery Road, which is high praise considering that film ends on one of the best shootouts in years.

One big change is Swan’s role. Played to perfection by Pedersen, he’s a magnetic force able to communicate as much with the tilt of his head as some people do with an entire monologue. He’s more ragged now, down and close to out, but he commands his scenes. There are simply less of them. For much of the story he’s peripheral, attention focussed on Josh; May (Michelle Davidson), one of the prostitutes; Maureen; David Wenham’s mining executive; and Jimmy (David Gulpilil), a senior figure in the local Aboriginal community. Swan’s still there, he’s just not the centre, more band leader than solo artist.

What remains is the cutting critique of Australian society. Sen uses dialogue as a last resort and he uses it carefully. Every single line comes with multiple meaning. Words are carefully chosen to place characters in the social hierarchy, backed by the smallest of actions. They hit home with the same deliberate aim as each bullet.

Mixed in come a couple of missteps. Early on Swan meets Pinky (Kate Beahan), a prostitute operating out of a mobile brothel. She’s a little too perfect, sweet and attractive and very good to him. She’s also used as a device to reveal his past quickly, one of the few times information is delivered inorganically. Women in general are a problem, May in particular singled out for a larger role that never quite comes. Goldstone is also structurally not as adventurous as its subject matter, sticking closely to the same narrative beats.

On content though it’s a leap forward, strong and thoughtful, denser than before. Sen not only shows what it’s like to live on the margins of society, he brings it to life. There’s a rich seam of emotion here, wrapped into a noir film wrapped into cutting social commentary. Goldstone is a crime thriller and a social drama, and by combining the two it becomes even more.