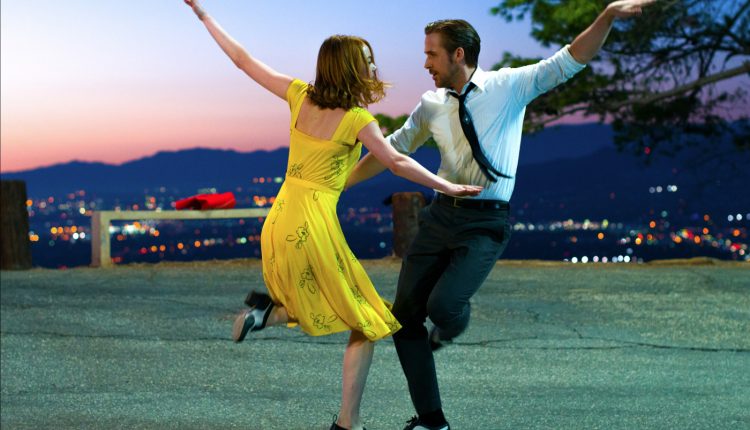 Some way in from the start, Emma Stone finds herself in a swanky restaurant dressed to the nines. The talk is boring, full of business deals and superficial pleasantries. Then she hears a familiar tune and it all fades down until only the music remains. That’s La La Land all over, an escape from the ordinary that brings Hollywood’s golden age into our time to create something really rather special.

When it was announced Damien Chazelle planned to follow Whiplash with an old style Hollywood musical, I must admit to reservations. It sounded like something that would fall flat, either turning into an impeccably coiffed period piece or a dire attempt to get down with the kids, complete with steel drums and synthesisers. Somehow he’s managed to create a fresh, vibrant work that wouldn’t have felt out of place on the Warner Brothers lot eighty years ago. It brings back cinema as a shared event, hundreds of people gathered in a dark room giddily excited by the action unfolding in front of them.

After a nod to film lovers everywhere, the first of many such Easter eggs, Chazelle opens on a gridlocked LA freeway. The sun is burning bright and everyone looks like they’re dressed for the beach, even if the chances of moving off their specific patch of asphalt anytime soon are remote. Then the singing starts, and the dancing, and the swirling colours and glinting light and spinning camera. La La Land is a musical and it will damn well open as one.

The story flitting around extravagant set-pieces is one of fast-talking romance, as befits a classic Hollywood picture. Stone is Mia, a wannabe star who works in a coffee shop. She auditions and she fails and she tries again. Ryan Gosling has a different problem. No one doubts Sebastian’s talent on piano. It’s his attitude that’s the problem. He’s a purist and won’t tolerate boring set lists. Ordered to play Christmas classics, he’s soon launching into his own repertoire, a move that sends him out the door.

Mia and Sebastian meet not once, not twice, but three times before they get anywhere. First she’s giving him the finger when he aggressively beeps at her for blocking the freeway, then he barges past when she tries to complement his music. Finally, after taunting him at a party where he’s reduced to playing A-ha covers, they get the verbal sparring going and love starts to blossom.

Chazelle isn’t overly interested in narrative when the music stops, happier unpicking themes. His decision to delve into the past and bring back the musical is not some half-formed notion borne out of watching Turner Classic Movies one night. He’s making a point about valuing the past while continuing to look to the future. Sebastian venerates the jazz greats, proclaiming them to be revolutionaries, all the while bemoaning the death of the form. He’s a traditionalist who wants only to hear the work of pioneers. Something has to give. La La Land is Chazelle’s answer to the question, proof all that’s great from the past can be brought forward and spun again to an updated tune.

What’s marvellous about his re-spinning is just how broadly successful it is. Musicals live and die on the tunes, and he has a few belters. The choreography never slips, whether dancing down apartment corridors, shuffling across deserted streets with the lights of LA below, or floating up into the stars inside a planetarium. Every detail has been thought through. Clothing is cool and classic at the same time; colours often match objects in the background. The story is split into seasons, told over the course of a year. Even section headings are used as jokes in a screenplay that packs in plenty of one-liners. Shut your eyes and it could be Katharine Hepburn and Cary Grant. Open them and the realisation its Emma Stone and Ryan Gosling is no disappointment.

Both have drifted a little in recent years. Gosling appeared stuck in his silent loner persona that Drive gave him, and Stone has sometimes struggled to recapture the casual energy of her breakthrough in Easy A. Both are back on form; the charismatic leads Hollywood isn’t supposed to have anymore (George Clooney aside). They can even hold a tune.

Lest this sound like too much gushing, there are flaws. The second half doesn’t come with quite the musical kick when the two lovers start to drift apart in pursuit of their separate dreams, and an argument over a romantic dinner and some pretty shoddy behaviour from Sebastian doesn’t ring true. There is at least a nice message that happiness comes not from tying yourself to others, but from achieving success on your own terms. Of course there’s also a cleverly worked in Hollywood ending, sad and dazzling all at once. Then it’s done, floating back to whatever magical place it arrived from. Experiences like this don’t come along very often, and should be cherished when they do. Everyone used to love going to the movies. La La Land is here to reignite the passion.