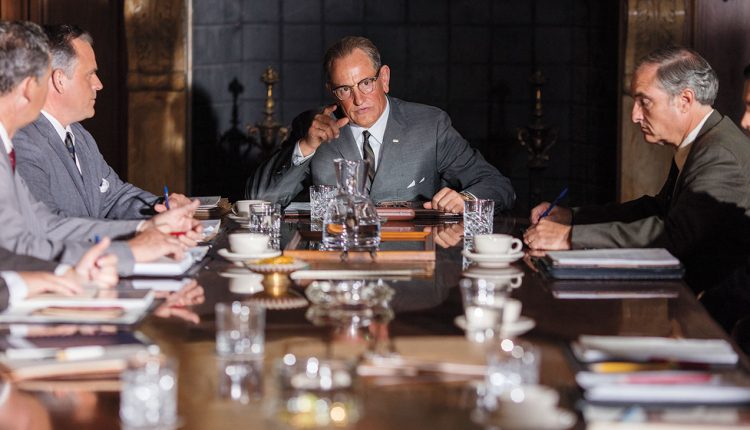 No one has ever been sure what to do with Lyndon Baines Johnson, the 36th President of the United States. He fell between the unforgettable John F. Kennedy and the infamous Richard M. Nixon, a hard place to land. As a Texan Senator he blocked action on equality and yet pushed forward the Civil Rights Act as President; and he fully embroiled the country in Vietnam, a disaster that went some way towards ending his career. Overshadowed and disliked, he finished shunted to the side-lines of Presidential history before his reputation underwent a revival.

The more attention paid to the turbulent domestic battles of the ‘60s, the more he creeps back into the picture with his vision of a Great Society that introduced multiple pieces of landmark legislation. He may not be as photogenic as Kennedy but here Hollywood, a little behind HBO, catches up, placing Woody Harrelson into LBJ’s shoes in the run-up to becoming Vice President, and then President.

Clocking in at a little above 90 minutes, Rob Reiner’s biopic covers a lot of ground quickly using Dallas 1963 as a framing device to jump from. The focus is two-part; on Johnson the man and Johnson the Civil Rights advocate. The latter is a gradual process that takes him from an ambiguous stance to steaming full ahead, even if it ends friendships with old Southern allies including Richard Jenkins’ Georgia Senator Richard Russell. The former shows a tough, earthy operator with a brittle skin that cracks when others poke at weaknesses.

Harrelson does an excellent job in the title role. Physically he’s no dead-ringer, but through easy charm, crude jokes and a bull-dozing style, he shows how LBJ became such a potent behind-the-scenes operator in Congress. Subordinates are barked at for imprecise information and colleagues face open mockery when not conforming to his view. He’s also content to brag openly about the size of his manhood, and hold meetings while sat on the toilet with the door open.

This side of LBJ is fast-paced and fun, giving a sense of the intricacies of Washington dealing without overdosing on detail. The atmosphere established, Harrelson begins to tease out Johnson’s complexities. In a telling conversation he describes himself as a workhorse and JFK, his rival to become the Democratic candidate, as a show horse. This theme sticks through the jockeying for position, through an awkward start to his life as VP, and into the immediate days after he takes over from Kennedy.

Entertaining as it is to watch, no effort is made to move beyond standard biopic tunes. Stirring, patriotic music booms out when decisions need to be made, grand speechifying becomes increasingly prevalent and the symbols of American iconography, from the Lincoln Memorial to the flag find their way into the frame. Only Johnson remains multi-faceted, more than a simple slice of American history placed on a gleaming marble pedestal.

After watching Johnson patiently move towards President, the film runs out of ideas, fading fast into a drawn out finale that induces yawns despite the brisk running time. It’s not helped by being so resolutely the Johnson show. Jennifer Jason Leigh is entirely wasted as Lady Bird Johnson, while Jeffrey Donovan ends up stuck with a cartoon version of JFK. Only Michael Stahl-David’s Bobby Kennedy gets to show something more, locking horns with Johnson. LBJ’s age and experience fall prey to a feeling of intellectual inferiority in their showdowns, a theme that comes up more than once as the old school operator tries to come to terms with the Harvard educated young guns shaping the future of the country.

The decision to expose Johnson’s flaws stop it from becoming another instantly forgettable biopic, offering instead a fascinatingly naked glimpse of huge ego, huge talent and a nagging feeling more is needed. LBJ wrestles gamely with a broad topic, wisely keeping the fight to narrow territory. There are failures along the way but Harrelson’s garrulous performance and a generally witty script help dig into the man.