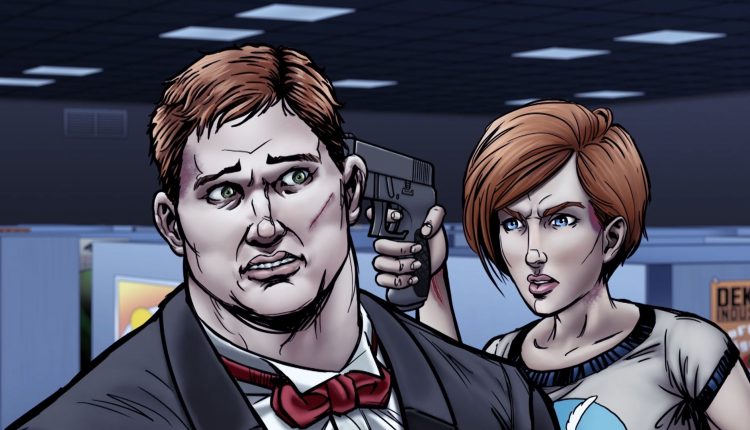 What do you get if you combine the repetition of Groundhog Day with the blood, guts and gore of Attack on Titan? You get To Your Last Death; an American animated action-horror feature that puts a dramatic and entertaining twist on the final girl narrative.

The film starts at the end, where Miriam (Morena Baccarin), the lone survivor of a supposed massacre, is found wandering the streets, covered in blood and with an axe in-hand. Once she’s in hospital, she desperately tries to tell the police what has happened to her and her family; that her evil, rich, dying father has killed her brothers and sister so that they cannot claim his fortune. The police are reluctant to believe her because she’s previously been diagnosed with mental illness and hallucinations. It’s a typical, timely exploration of a woman’s cries being concealed, forcing her to take the case into her own hands. What ensues is a mostly rapid-fire game of cat and mouse filled with devious death-traps and a ruthless villain at the helm of it all.

In order to save her family and prove her story’s truth, Miriam is given the chance to go back to the beginning. The mysterious appearance of the Game Master sets this in motion, allowing Miriam to re-live the murderous day over and over again. The only catch is, the Game Master is in charge, so if the day isn’t “entertaining” enough, Miriam will have to go back to the beginning all over again.

Much like the meta-horror Cabin in the Woods, this offers the film the opportunity to explore ideas around viewer-ship and the price of entertainment. The passive audience is not the only ones watching, as it becomes clear that there is another level of spectators present and they’re after the most gruesome outcome possible. But, as lovers of horror and the extreme aren’t we, too?

To Your Last Death boats an impressive set of voice actors that help to bring its menacing story to life. As Cyrus DeKalb, Ray Wise is as villainous as possible as he delivers simple and sadistic lines like, “Cut him in half”, whilst his character sips a whiskey on the rocks. He’s certainly a clichéd bad guy, but as the film itself is a culmination of horror, action and sci-fi iconography and ideals, he fits right in. Horror favourite Bill Moseley is the voice of Cyrus’ cohort Pavel and, as ever, he slips into a villainous role with ease. The voice of William Shatner makes a fleeting appearance as The Overseer who provides the audience with a narration that isn’t wholly necessary but furthers the film’s mystery and menace.

In a particularly Saw-esque fashion, Cyrus DeKalb AKA Jigsaw, creates unique and torturous traps for his offspring that they are doomed to fail, and failure means a grisly death. It is up to Miriam to save her siblings and shine a light on her father’s twisted and maniacal plan. It’s entertaining to watch the near-deaths unfold and it can’t be denied that there has been a ton of creativity thrust in To Your Last Death, but the film’s voice is an overall hollow one.

On its surface To Your Last Death is explosively fun and the effort that has gone into its creation deserves a ton of credit. It’s animated to perfection; its visual style is top-notch and will be loved by fans of adult animations and Anime. However, beneath its hyper-violence lies very little and it’s a shame that it doesn’t really have much to say. If it could have balanced its entertainment value with its intelligence it would have been truly special. That being said, I am undoubtedly excited to see what director Jason Axinn and the creative minds behind To Your Last Death do next.