Tomb Raider – A Legend Returns to the Big Screen

by Rachel Wright
in Film Review

Globe-trotting archaeology, hip holsters and two pistols in the hands of a capable woman – with the upcoming release of a new Tomb Raider movie, here’s a rundown of the title and a few clues as to what you can expect from the next big action-adventure on screen. 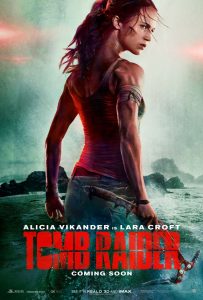 The Franchise as it Stands

By now, Lara Croft is all but a household name. From her humble beginnings with game developer Core Design in 1993, to the star of a multi-million-pound franchise in the modern day, it’s been two decades of quality releases and powerful stories for Tomb Raider and its humble protagonist. Croft and her smarts, her wit, and her strength have been all around the world, and the fans have all gone with her. She’s on lunchboxes, t-shirts, has her own action figure and set of online videoslots that bring the game to a whole new platform. In the five-reel title Secret of the Sword, for example, Lara must find fragments of the mythical weapon to win the jackpot. If you didn’t know already: Tomb Raider is about solving puzzles. It’s about booby-traps, the perils of nature and narrow escapes in the nick of time. Such a premise translates well to film. After all, it’s been done before. The franchise could be seen as a spiritual successor to Indiana Jones for some, with new mysteries, new tech and a new leading lady.

With 17 games under its belt so far, we first saw Tomb Raider come to life on the big screen in 2001. Angelina Jolie went up against Daniel Craig in this HD realisation of the series, in a treasure hunting tale that spanned from England to Cambodia to Egypt. If you’re new to Lara’s adventures and interested in the upcoming film, this might be the place to start. This, and the 2003 sequel movie Tomb Raider: The Cradle of Life.

So: with so much media already out there for Tomb Raider, what can you expect from its next venture into the Hollywood playground? Well, the trailer gives us some idea. Tomb Raider (2018) seems to be a collation of two of the franchise’s most recent video game plotlines – we have Lara shipwrecked, seemingly alone on an island against a group of baddies, and it’ll take all her courage and ingenuity to overcome the threats that are placed before her. Her father has discovered a tomb known as ‘The Mother of Death,’ and, following his own demise, it’s up to Lara to investigate.

She’s against mother nature, a classic villain, and finds herself reduced to a makeshift bow and arrow rather than her iconic guns (for a while, at least). It’s action. It’s jump scares and heart-in-your-throat moments. How original the movie makes things, though, remains to be seen. Fans of the videogames could potentially find themselves disappointed by the lack of new content or fresh story in the release.

Tomb Raider has seen success after success in the past few years. It’s a series that has not only survived the decades since 3D gaming first came to be, but flourished, and has captured the hearts and minds of fans everywhere. In the present day, with strong female characters in film in high demand, this movie could be its next step in the right direction, bridging the gap between the games and a wider against much like its earlier predecessors tried to do. All that remains to be seen, however. Only time will tell, as the franchise continues to explore the story of the legendary Lara Croft across multiple platforms, one title at a time.