Tom Cruise wears sunglasses a lot, and gives his biggest grin. Jets fly too close to one another. Kelly McGillis is at her most gorgeous (well, with this movie and Witness). Berlin keep gatecrashing the soundtrack with “Take My Breath Away” before the coolness of Sir Kenny Loggins cuts in. And Val Kilmer is a bit of a git. Everyone knows Top Gun, even if they haven’t seen the movie. I made the mistake of actually seeing Hot Shots! before I saw Top Gun, making it impossible to take the movie seriously. Not that it is easy enough to watch with a straight face under normal viewing conditions anyway. 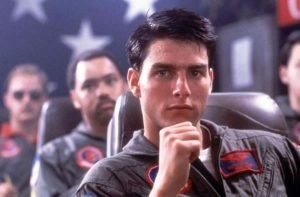 There IS a plot, it just happens to be insultingly lazy and not worth describing in detail, but I will. Because when I suffer, I like others to suffer, too. Cruise plays a pilot nick-named Maverick, because he’s a bit of a maverick. He’s a damn fine pilot, but also pretty reckless. When Maverick, and his good buddy (Goose, played by Anthony Edwards), ends up among the best of the best at the Navy’s elite facility that develops talent, and puts one at the top of the pile as the Top Gun, he soon finds himself getting in trouble because of his cocky demeanour and disregard for many of the rules that the pilots have to adhere to. He also starts to woo a woman (Kelly McGillis) who turns out to be an advisor at the facility. Tom Skerrit and Michael Ironside play the teachers hoping to harness Maverick’s talent, while Val Kilmer, Adrian Pasdar and Rick Rossovich do their best to keep his ego in check. 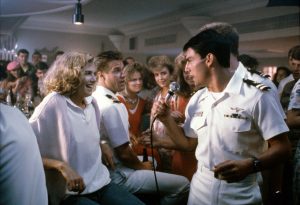 There are three major plus points going in Top Gun’s favour. One is Tom Cruise. Oh, he is, for many people, at his most irritating here, but he is perfectly suited for the role, always displaying just enough charm behind the grin and seemingly carefree attitude. The second plus point is the fantastic soundtrack. This may not be the best soundtrack from this decade, but there are enough great tunes here to make it still worthy of a space in my own music collection to this day. Last, but not least, is the superb aerial cinematography that puts viewers in the thick of the action.

As well as Cruise shining in the lead role, the cast is uniformly superb, even if they’re not working with the best, or most original, script (a blend of cliches and cheese, written by Jim Cash and Jack Epps Jr). McGillis and Ryan are both underserved in a film that’s more focused on men either admiring each other, or being jealous. Edwards is very easy to like, Kilmer is easy to enjoy as the main competitor for the top spot, and everyone else seems to have fun. Skerritt and Ironside, and James Tolkan, are great to watch as the older, wiser, characters trying to make Maverick realise that he can still realise his full potential without having to disregard every order that he’s given. 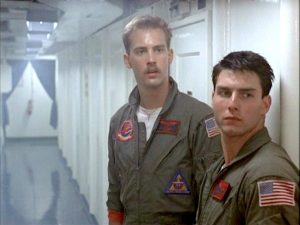 It’s easy to watch Top Gun with a mix of eye-rolling and groans as the cheese piles up and up and up, but it does what it does very well. Yes, a bit of self-awareness may have helped, or even a slight deviation from the by-the-numbers plot developments, but think of this as director Tony Scott using jet planes to provide people with one big homage to Douglas Sirk and you can’t quibble too much about the end result. Oh, and it also serves as a reminder of how smooth and great Scott could be before he decided to edit his films to within an inch of their lives. 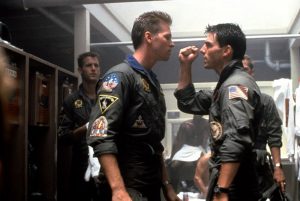