Jia Zhang-ke, China’s most important unconventional “sixth-generation” movie director, has hitherto restricted himself to complex, generally low-keyed portraits of his country in the throes of development. But this time in A Touch of Sin he turns to a four-chapter study of violence that is both more overtly moralistic and more “genre” than anything he’s done before. Obviously Jia has been jolted by what he’s learned about the drastic ill effects and inequalities of rampant capitalism in the ROC. The panorama is rich, but the results are mixed and the collection lacks coherence. If his point is that bad behaviour is rife, the point’s well taken. But the kinds of “sin” are so various here that the effect is scattershot, the specific relevance to contemporary events unclear. However, the individual segments are still wonderful, at least intermittently, and the evocation of the contemporary Chinese milieu in various regions is often vivid. And some will argue this film is in harmony with Jia’s other work: he has just added weapons and murder to make “a martial arts film for contemporary China,” as film critic Marie-Pierre Duhamel quotes Jia as putting it. In fact, except for a highway sequence and a sauna killing sequence, this claim to having made a wuxia film is far-fetched indeed. 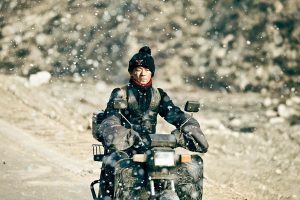 To begin with, there’s an imbalance in the chapters. First comes a man who takes revenge on several political and social wrongdoers. Next is a guy who simply goes on a wild killing spree. Third is a woman who wrecks horrible vengeance on a man who mistreats her in a sauna-massage parlour. Finally we follow a youth whose aimless, impoverished life as a factory and sex worker and failed lover leads him to suicide. These can’t be seen as at all the same kind of things, though all clearly do happen, though in different parts of the country, with similar backgrounds of rampant exploitation, graft, and inequality.

In the first episode Dahai (Jiang Wu) comes back to Black Gold Mountain, Shanxi province to blame the village boss in person for his personally profiting from selling off the state-owned local mine and not sharing the proceeds with the workers as he’d promised. Dahai writes a letter of protest about this to the Discipline Commission in Beijing but can’t seem to get it sent. A new fat-cat mine boss Jiao Shengli arrives by newly acquired private plane from Hong Kong and at the ceremonial arrival Dahai confronts him and Jia Shengli has him brutally beaten with a shovel, which they joke is “playing golf.” After visiting his elder sister, Dahai decides to take matters into his own hands and simply kills some of the wrongdoers. Dahai is an almost comically simple and brutal character, but his moral outrage is clear.

In part two, which is completely pointless and amoral, Zhou San (Wang Baoqiang), a migrant worker who loves guns, has already shot and killed three highway bandits from his motorcycle in the opening pre-title sequence in Shanxi (the director’s home province). Zhou then visits his wife and young son in Chongqing, where his elder brother splits up the leftover money from their mother’s 70th birthday celebrations. But he declines to take his share. Instead he goes on a trip that turns into a killing and robbery spree.

Part three. Further down the Yangtze River, in Yichang, Hubei province, Zheng Xiaoyu (Jia’s chief actress and muse Zhao Tao) sees off her married lover, Zhang Youliang (Zhang Jiayi), on a train to Guangzhou, where he will manage a factory. He gives her six months to decide whether to join him or not. When she returns to work, she is later cursed and physically attacked her lover’s angry wife. After visiting her mother out of town, Xiaoyu returns to the sauna where she uses a fruit knife she took from her lover when the train security people wouldn’t allow it on a bullying customer who wants her to perform services that have nothing to do with her job as the cashier. 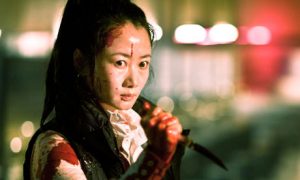 Next, in the fourth and last segment, In Guangdong province, at the factory managed by Zhang, Xiaoyu’s lover, a young employee called Xiaohui (Luo Lanshan) is ordered to turn over his salary while a coworker is off work with an injury that happened while they were chatting. He instead runs off to Dongguan, where he gets a job in a luxury hotel that caters to rich sex tourists from Hong Kong and Taiwan. He bonds with a cute female coworker, Lianrong (Li Meng), who’s from his home province of Hunan. The naive, pretty young man falls for Lianrong, but she tells him he knows nothing bout her: she has a 3-year-old child. When he sees her “working” at the hotel, his disenchantment causes him to flee again and go to work at another factory, where he soon commits suicide.

All this is interesting and illustrates Jia’s penchant for rapid, disjointed incident and rambling storyline at a high level of energy, but it is also too much to take in. Derek Elley is doubtless right in his review of A Touch of Sin when he comments that Zhao Tao (but not the subtle Zhang Jiayi as her lover) is, as usual, a comely blank; hence I would say her murder, though revenge for criminal and odious behaviour, seems cold and amoral. But as Elley says the young man’s psychology in the last section is more fully developed. Though it’s not made at all clear how he could suddenly have become desperate enough to kill himself, his naivety and disillusionment of his existence and his typical lack of anything but the grimmest prospects (much like the young men much earlier in Jia’s Unknown Pleasures) come through clearly and movingly, even though they are subtle. For me, Still Life remains the most magical of Jia Zhang-ke’s recent films, with unity and haunting delicacy. 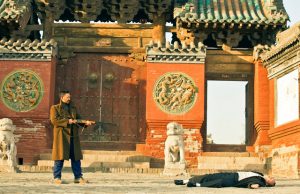 There is much good stuff — too much — in A Touch of Sin. While the fourth, Xiaohui, episode is like a more touching segment of Jia’s The World, one wishes that Jia had found a way either to expand the opening Dahai segment into a whole feature, or to have multiplied other segments in the same vein, perhaps focusing on other industries. While it’s probably true as Elley says that “Most of Jia’s films have been essentially episodic, with little grasp of long dramatic lines,” in some of them that works more than in others. Platform, for instance, is held together by the adventures of the theatre company, and becomes a rich chronicle of a decade. This time each episode is very strong in its way, but the whole suffers from the clear sense that they don’t quite belong together. What is great in A Touch of Sin and makes it a delight to watch is the cinematography by d.p. Yu Lik-wai.

A Touch of Sin debuted at Cannes May 2013, where it got the best screenplay award, and has shown since at half a dozen other festivals. It was screened for this review as part of the New York Film Festival at Lincoln Center.