There are a lot of film-related press releases that I ignore, because I tend to stick to horror and skip over much else. I try to venture out, but horror is where my heart is. When I received an email titled “ONLY for Serious Fans of Horror” I, quite literally, eye-rolled. What new hellish experience is someone inviting me to? What horrifying film has made people vomit or pee their pants this time? A film called Trauma, apparently. Nice.

The email contained a warning:

“Unless you are a horror fan or critic who can take anything a filmmaker throws at you, we’d advise you to skip this release – delete! We didn’t even submit it to iTunes – they’d probably ban us.”

I hadn’t received an email like this before, so I watched the trailer. Yeah it looked pretty grisly, but I’ve seen everything, right? Apparently I hadn’t. Trauma is something else. Something almost indescribably nasty. It’s abhorrent, disgusting and ultimately traumatising. Get out your thesaurus and look up “horrible” and each word will describe Trauma. This isn’t really a review for me, it’s a kind of closure. The words that follow are me drawing a line under what Trauma showed me and hoping that I never have to watch anything like it again. 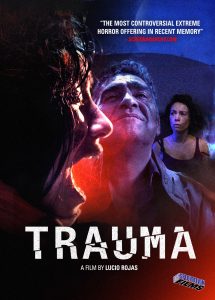 Who am I kidding? I’ll watch anything.

On paper Trauma sounds like that slasher film you’ve seen 100 times. A group of women venture to a cabin for a weekend of fun and partying, but a knock at the door changes everything. They answer the door to 2 men who, to put it lightly, put them through hell. In the film’s opening scene – which I think is the most horrific 8 minutes of the entire film, despite the murder, rape, mutilation, torture, suicide and abuse that follows for another 95 minutes – we’re shown why the men – one in particular – are this way. So, at least, there’s a reason why these men are violently raping these women, am I right?! They have their own trauma, so it’s all A-OK!

This is a film of two sides; on one side we do have a strong political message about the real-life horrors of Chile’s Pinochet regime in the ’70s and the cycle of abuse that occurs when someone is a victim of such a regime. It wants to be taken seriously and lauded for its bravery in confronting the country’s terrifying past. It wants to teach us about the problems of dictatorship, prosecution and straight-up murder.

There is an attempt to educate its audience on the terrors of Chile’s violent past, but the teaching becomes forgotten and drowned by the film’s other side. The other side is the nastiest. It’s the side that will choke its audience with gratuitous sexual violence, which includes the rape of men, women and corpses. This side wants to do nothing more than push the boundaries of cinema and shock you. When you’ve got one hand in the political pie, you can do anything with your other hand, right? 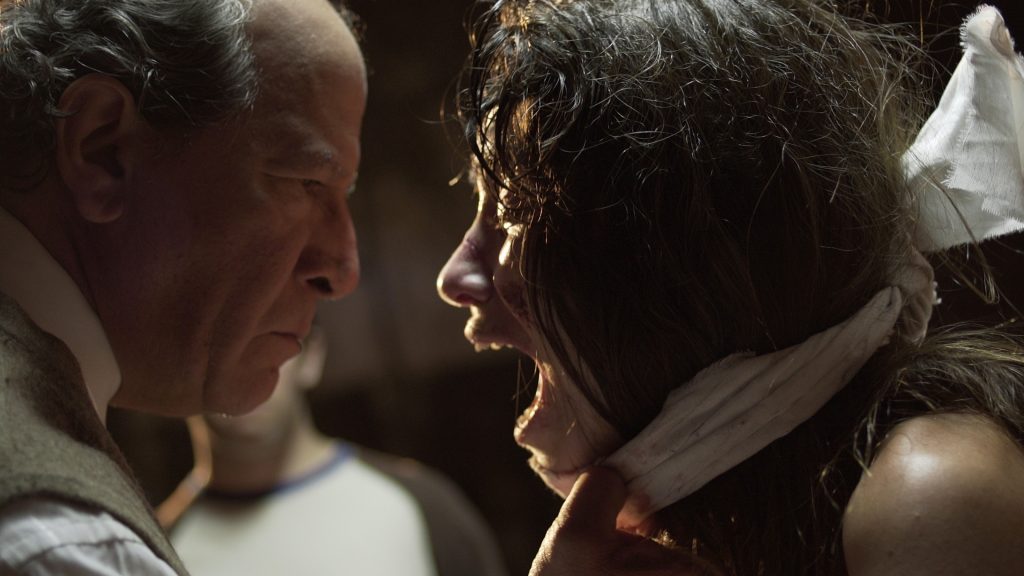 Trauma succeeds in its desire to be traumatising and controversial, but there’s nothing else to it. I don’t feel enlightened by what I’ve seen. I don’t feel like a better person or a more educated one. I feel dirty. When the film’s credits rolled I felt upset and disturbed; I wondered how the cast felt filming something so tasteless. I wondered if A Serbian Film was all that bad. I wondered if I’d ever see a film with an opening scene as shocking as this one. I’ll put my figurative pen down forever if I do.

I suppose I should commend the film’s writer-director Lucio A. Rojas for crafting something so brutal. I’d quite easily say it’s the most difficult film I’ve ever watched. Is this the most terrifying film to come out of Chile? Easily. The cast, also, deserve a lot of praise for their part in bringing Trauma to life and for giving their absolute everything to characters that must have been mortifying to play. Trauma is as visceral as they come and will leave you feeling like you’ve been smacked round the face with a washing machine. It’s impossible to love, but deserves to be watched by those that whole-heartedly want to see all that film can offer.

I don’t want to recommend Trauma to you. It’s not enjoyable. It’s not fun. It’s grotesque. It’s icky and gross and difficult. It’s traumatic. You’re going to seek it out aren’t you?

by Johannes Black
No Result
View All Result