An anthology movie based on that classic TV show (and my personal favourite TV show of all time), Twilight Zone: The Movie may, like many anthology movies, not hit a home run with every segment, but it does a better job than most, and is book-ended by two truly memorable sequences that help to raise the whole thing to another level.

Let me try to summarise each section as briefly as I can. Things kick off with Dan Aykroyd and Albert Brooks driving along a quiet road. It’s a fun introduction, directly referencing the TV show by name, and also poking fun at the fact that many people would often confuse episodes of The Twilight Zone with The Outer Limits.
Then it’s on to the film proper, with a tale directed by John Landis. Vic Morrow plays an unpleasant, angry racist who ends up in the twilight zone, where the tables are well and truly turned.
The second tale is, many agree, the weakest link. I think that it holds up okay nowadays, with the mix of humour and sentiment, but it definitely didn’t have to be as sweet. That can maybe be blamed on director Steven Spielberg, who gives us the tale of an old man (Scatman Crothers) in a retirement home trying to help his fellow residents remember their youth with a game of Kick The Can.
Joe Dante takes over for the third tale, a trip to the zone for a  teacher (Helen, played by Kathleen Quinlan) who meets a young boy named Anthony (Jeremy Licht). Unbeknownst to Helen, Anthony can make the world around him into anything that he pleases, which explains why his family members are so nervous.
Last, but by no means least, George Miller directs the story of a man (John Lithgow) who thinks that he sees something on the wing of a plane. He’s correct, but nobody else believes him as he tries to figure out a way to stop the creature from destroying the engines. 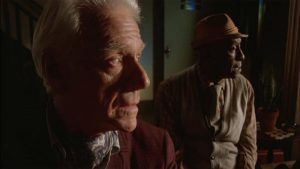 Enjoyable stories, a great cast, and talented directors behind the camera ensured that Twilight Zone: The Movie would never be a complete misfire. Unfortunately, the uneven quality of the tales meant that it seemed to be a film best remembered than ever rewatched. Revisiting it years after my last viewing, I think it holds up pretty well.

That Spielberg section remains the weakest, in my opinion, but it doesn’t seem as bad now as it did when I was a teenager. In fact, my own advancement in years makes it seem more effective and poignant, although the manipulative score and direction still cause some irritation. The tale directed by Landis is solid, if unspectacular (although the on-set tragedy that I won’t detail here lends it an extra bleakness), but things pick up in the second half, with Dante doing his usual good work before Miller delivers what turns out to be everyone’s favourite, or close enough.

Other aspects of the movie to enjoy include narration from Burgess Meredith (who did, arguably, some of his best work on the classic TV show), a cameo from Dick Miller, and a score from Jerry Goldsmith that nicely foreshadows his work on Gremlins during the fourth tale (which is about, well, a gremlin).

There are better horror anthologies out there, and this rarely comes close to the brilliance of the original TV show, but it tries hard to please, and its heart is in the right place. I can’t imagine too many fans of The Twilight Zone being disappointed.