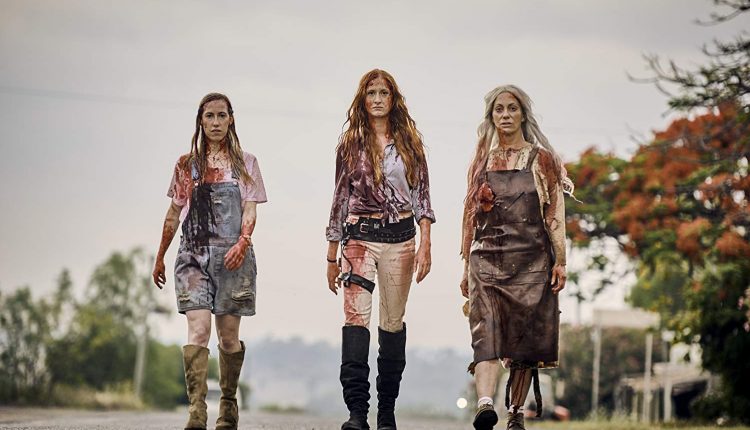 If you have neither a taste for Australia nor for meat, then the new black comedy Two Heads Creek is likely not for you. If however you like your horror with a hearty helping of gross-out gore and no attempt at the subtle art of suggestion, then the outback town at the centre of the story and from which the film takes its title, is definitely worth a visit.

Following the death of the woman they have always believed to be their mother, Norman (Jordan Waller) and his twin sister Annabelle (Kathryn Wilder) discover that they were adopted and that their real mother actually lives in Australia. Deciding they’ve nothing to loose – running his late adoptive mother’s butchery business was never really part of Norman’s long term career plan – the siblings leave the grim north of England for the promise of adventure and reunion with their real mother in the sunny Australian backwater of Two Heads Creek. It’s only when they arrive however that they discover why few people ever visit the town and even fewer leave.

As said if meat based humour, which delights in making the Antipodean people and their culture (or lack of it) the none too subtle butt of the joke, isn’t your dish, then you may find this Australian / UK co-production hard to stomach. Though refreshingly clever in places, much of the film’s humour is at the expense of Australians and their homeland. Dialogue such as that between Norman and Annabelle when he asks, “you don’t see anything wrong with these people?”, to which she replies, “no, I just think they’re Australian”, is pretty in your face as regards to a lot of outsider’s attitudes towards people from down under. There again as many of those involved in the film’s production hail from Australia, it hardly seems right to take offence if they themselves don’t mind being sent up.

As for the lack of refinement where the film’s horror is concerned, this simply seems in keeping with the attitude of many contemporary filmmakers towards the genre. Considering there is much play in the storyline on meat vs Veganism – a term the inhabitants of Two Heads Creek are clearly not familiar with – it’s pretty safe to assume that those behind the film were going to take every opportunity to introduce as much gross-out body horror as possible.

Cannibalism – and in particular the processing of unfortunate human victims as the main constituent of popular savoury treats – has been a horror staple for many years: films such as the cult American black comedy Motel Hell (1980) and the more recent British horror thriller K-Shop (2016), have all proven that people will try most things if they aren’t fully aware of the ingredients.

And so it is with Two Heads Creek which, if anything, simply proves that Australians are as good as anyone when it comes to adventurous eating. Though at some points there is not even a pretence of subtlety as when severed limbs and body parts are tucked into with gay abandon during an annual town barbecue, at other stages the fact the main ingredient of some dodgy looking meat products is only alluded to makes them all the more unpalatable.

And thats pretty much it. Though the cast may appear to ham-it-up, their performances seem in keeping with the film’s generally farfetched and over-the-top premise. And if you manage to take it all with a large pinch of salt – like the inhabitants of Two Heads Creek do with their meat – you probably won’t go far wrong.