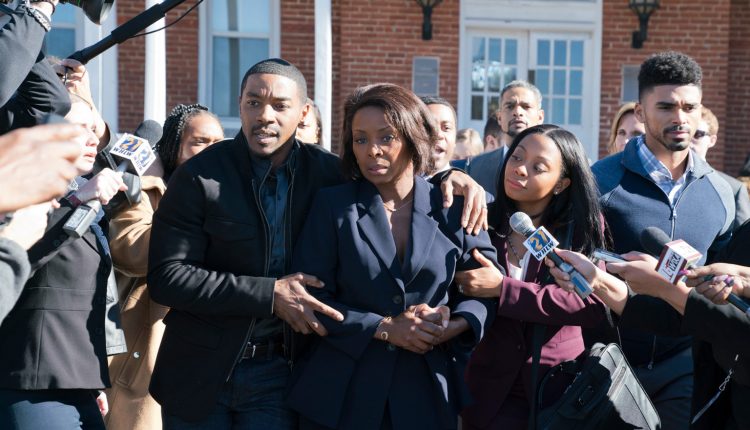 The film’s titular woman scorned Grace Waters is certainly not the only one taking a serious fall in this transparent and turgid murder mystery/courtroom drama Tyler Perry’s A Fall From Grace. Her creator–filmmaker Tyler Perry–tumbles alongside his harried heroine as both individuals are responsible for a heinous crime. For the fictitious Grace it is killing her insufferable husband. And for Perry…well…it is once again putting a camera in his hands and letting the horrendous mediocrity flow.

Indeed, the hideous showcase A Fall From Grace has a couple of distinctions linked to its misguided association. For starters, it is Perry’s first post-Madea film project since the performer decided to retire the stereotypical southern grandma’s frizzy gray wig and baggy frock dress. Also, Perry’s lethargic legal thriller marks the first entry from his heralded Atlanta-based movie studio for the streaming channel Netflix. Unfortunately, Perry’s relentlessly choppy and disjointed disillusionment drama A Fall From Grace is so much of a mockery that this cinematic cyst may have the moviemaker returning back to wearing Madea’s saggy panties.

It is no secret that the majority of Tyler Perry’s flimsy films during the course of his nearly two decades of movie-making have been mercilessly maligned by the film critics and the moody botch job A Fall From Grace certainly testifies to the constant criticisms of Perry’s slapdash film philosophies. Perry does have his avid fans as they do not mind the familiar one- note Christian themes of distressed black womanhood (sassy or serious) or the exaggerated flourishes of manic and/or melancholy overtones. Reportedly, Perry took less than a week to wrap up production for A Fall From Grace and the online community have been having a field day with the noticeable edit gaffes, continuity miscues, outlandish hair/wig ridiculing, water faucet drip-like pacing, labored theatrics, etc.

The aforementioned Virginia-based Grace Waters (Crystal Fox from Tyler Perry’s long-running OWN TV show “The Haves and the Have Nots”) is a woman standing on the quiet edge of madness. Although respectable and revered, Grace has struck out in love when her ex marries another woman. For companionship, Grace enjoys her bonding with best friend Sarah (Phylicia Rashad). However, Grace heart soon flutters again when she falls for handsome Shannon (Mehead Brooks). Ultimately, he becomes husband number two. Soon, Shannon’s menacing unpredictability drives Grace to the urgency of hopelessness. The price becomes too high when Grace finally snaps and is charged with a murder wrap as a result of Shannon’s demise.

Enter Jasmine (Bresha Webb), the young lawyer assigned to defend the beleaguered Grace in court. Grace wants to plead guilty to her murderous misdeeds but the ambitious Jasmine cannot help but wanting to dive into the untold story that she feels her client is holding back. The two women get to know one another as the bleak interrogation room serves as their bonding bubble. Older and disenfranchised Grace feels betrayed for falling in love with the younger charmer Shannon. Millennial Jasmine is the over-educated lifeline out to rescue her client’s fragile remains of sanity.

Consequently, Tyler Perry’s A Fall From Grace is merely a cut-and-paste courtroom caper that plods along without any concrete conviction. Woefully drab and stillborn, this foul legal eagle whodunnit gets its wings clipped as the suspense monotonously drags. The obligatory flashbacks are annoying and aimless. The acting for the most part is wooden and detached. There is no sense of visual style or stimulation to offset the clunky, uneventful narrative. At this point, we are at least hoping for some of the murder-oriented cliches of a woman undone to add something to Perry’s behind-the-bars borefest.

While Tyler Perry’s A Fall From Grace masquerades as a convoluted courthouse nightmare embracing its incoherent whims the one resounding element is Fox whose layered portrayal of the fallen Grace is heartfelt and convincing. Television viewers experience their weekly dosage of Fox from her dynamic role on The Haves and The Have Nots so it is not surprising that the gifted actress brings her all to a flaccid film that fails her on various levels. Also, it is our pleasure to see the likes of veteran performers Rashad and the great and legendary Cicely Tyson on the big screen.

Tyler Perry’s A Fall From Grace