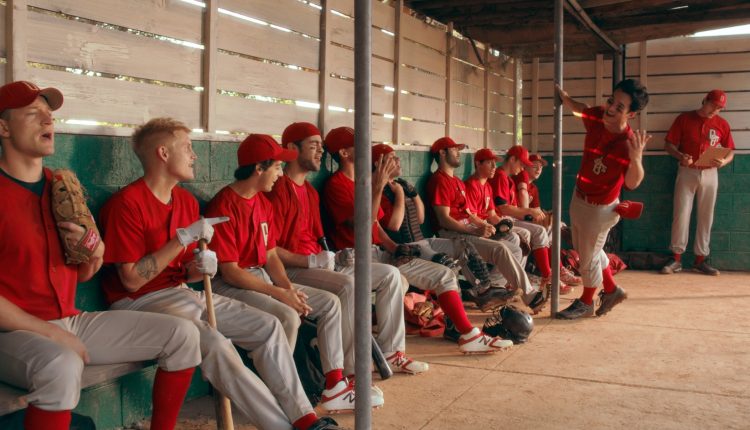 These guys give ‘minor league’ a whole new meaning.

What should have been an inconsequential intramural baseball game suddenly means everything to the Diamondbacks when their star player is passed over for the MLB draft. Twelve teammates, all with varying skill and commitment, make one last-ditch attempt at triumph, while tempers and the heat soar.

Written and directed by Joe Mazzello (of Jurassic Park and Oscar-winning Bohemian Rhapsody fame), Undrafted is a love letter. Unfortunately, it is from a group of boys to a sport that really didn’t love them back. His second directing credit to date, Mazzello has made a film that is obviously deeply personal and yet still transcends barriers of geography and knowledge of the sport.

Everything we see in Undrafted is based on real-life events, backed up by blurry home video footage of the game. John Mazzello decided to play in an insignificant game despite just hearing that he missed out on the Major League draft. The Diamondbacks pull their shambles of a team together to try and win against the antagonistic Bulldogs, and win for “Maz”.

Admittedly, I know very little about baseball. Actually, I know nothing about baseball, but even a total stranger to the sport can follow this movie. The emotions are so strong and clear, you don’t have to understand the rules to know when things are going well for the Diamondbacks and, more often, when they’re not. Athletes and spectators alike can laugh at their antics and feel that breath-stopping tension when the film reaches its crescendo.

Part of the film’s charm is that, despite its underdog tale appearance, this movie is not a cliché. Famous faces scatter the dugout. Mazzello himself stars as the, shall we say, passionate, Patrick Murray. He is joined by Tyler Hoechlin and Chace Crawford, with newly Tony-nominated Aaron Tveit as “Maz” and Jim Belushi as his father. Yet they look like a ragtag baseball team, from their ill-fitting uniforms, the constant infighting, and varying degrees of talent. The characters will undoubtedly win your heart by the finale, but they’re not heroes. They’re just young men, trying to win a game for their brother in red.

There was also no attempt to glamorise the setting. It’s just a simple baseball field in a small town, which still looks rough even after the groundskeeper has visited. And yet, there’s still something beautiful about it all. The colours are so warm, its ensemble so real. These overarching themes of brotherhood and home make the film nostalgic, even to non-Americans.

This is a film about family. The real John Mazzello even makes an appearance, ironically, as a member of the opposing team. Undrafted may not be your typical multi-million dollar blockbuster, but it doesn’t need the pomp and circumstance of other sports movies. Mazzello manages to weave heart-to-hearts and genuine sincerity amongst brilliant comedic moments and tense action. With a fondness for the game that is rarely seen, these characters, and the field they love to hate, shine.