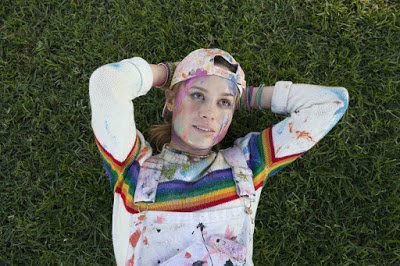 In a sequel to the billion dollar smash hit, Captain Marvel must complete a series of tasks set by Nick Fury in order to get a real-life unicorn in Unicorn Store.

It might sound like a joke Deadpool would make about the MCU but in reality this is Brie Larson‘s directorial debut.

Since screening at the festival circuit last year, including the Edinburgh International Film Festival, the film has struggled to find a release. A surprising notion given the film is by an Oscar-winning actress. However Netflix wisely released it in the wake of Captain Marvel, knowing that the film would provide a huge new audience.

Kit (Larson) is kicked out of art school and moves back in to her parents’ house. While she tries to figure out her future, a mysterious salesman offers her the chance to own a unicorn. If she can fulfil a number of chores and criteria. Will the challenge offer her a chance to gain some grown up responsibility or see Kit regress deeper into adolescence?

Of those, Unicorn Store is most akin to Garden State in terms of story, character and success.

Larson delivers a charming performance as Kit, showcasing her comedic side that was evident in Scott Pilgrim but not really called for in her breakout films Short Term 12 or Room.

She also has a great understanding of comedy as a director. Whether it is Kit’s fears compounded via commercials as she channel hops the TV (a well worn gag but executed perfectly) or a single shot of someone’s smile fading, held to just the perfect length.

Larson has also surrounded herself with an excellent cast. Joan Cusack and Bradley Whitford provide great support as her parents who run an emotional retreat for troubled youths. Hamish Linklater has some great laughs as her borderline inappropriate boss and Samuel L. Jackson is Samuel L. Jackson as The Salesman. However it is Mamoudou Athie who steals the show as the hardware store clerk Virgil who becomes Kit’s potential real-life unicorn that could give her life meaning and purpose.

For all the whimsy in Samantha McIntyre’s script, one with more charm than a box of Lucky Charms, there is a moral message at its heart. Ultimately, the question of whether or not the mystical unicorn actually exists is irrelevant. The Salesman is teaching Kit how to get her own life in order. For as long as you believe in something, whether family, a relationship, work or a unicorn, you will be okay.

Unicorn Store is a sweet, sweet film but beneath the quirky, glitzy exterior is a message at its nutty centre. So kind of like a Ferrero Rocher then. Brie Larson, with your debut you are really spoiling us!

Unicorn Store is available on Netflix from April 5th