Mixing some fleeting moments of stop-motion animation with more traditional film-making techniques, I Believe In Unicorns manages to keep things impressively dream-like throughout, making even the more unpleasant moments palatable. Writer-director Leah Meyerhoff uses escapism to look at escapism, on different levels, and the end result is a small film that I was drawn in, and impressed, by.

Natalie Dyer is Davina, a young girl with a very vivid imagination. She’s grown up in a household with her disabled mother, just the two of them together after her father ran off many years ago. But Davina starts to consider running away to start a new life when she meets Sterling (Peter Vack), a boy who is into skateboarding and heavy rock music. All is well at first, with the two of them dreaming of just heading off together to find what may lie beyond the horizon, but it’s not long until clouds start to cover over the rainbow. Sterling has some issues, making him moody and sometimes prone to violent outbursts, while Davina may simply be unprepared for any actual attempt at living an adult life. 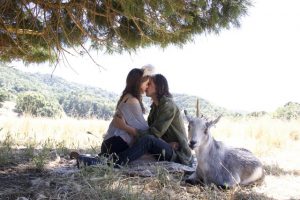 Meyerhoff makes the most of her assets here, her ability to create just the right aesthetic for the material and her two main cast members. Dyer is suitably naive and childish at times, while Vack portrays a potential hothead in a way that doesn’t make him automatically loathsome. He’s obviously got a lot of baggage that he doesn’t know how to deal with. The fact that some of the more unsettling moments move back into stop-motion animation makes the material easier to handle for the audience, and also shows just how Dyer processes everything in her mind.

Staving off accusations of pretentiousness, mainly due to the wonderfully vivid imagery that calls to mind the best creations that can spring from the minds of children, Meyerhoff makes a lot of smart decisions to best showcase the ideas that she’s looking to explore. The camerawork, the rhythm, the changing tone, all of these things work to service the script better, although they could just as easily have made the viewing experience quite an arduous one.

I didn’t love I Believe In Unicorns, but I did end up really liking it. It was a pleasant surprise. I’m sure that some people will view it as far too cutesy and insubstantial, but I, for one, appreciated that incongruence between the reality and the mental visions of the main character.