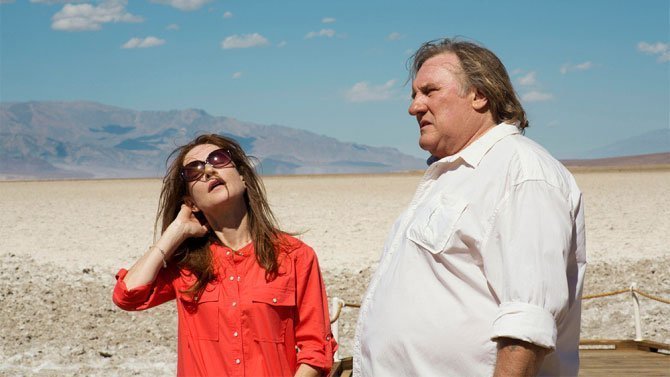 No matter how international they purport to be, all film festivals have to be based somewhere. The impulse to give a little boost to local talent becomes a hard one to fight. Valley of Love, perfectly serviceable as it is, feels like one such beneficiary. Competing well above its station for the Palme d’Or, Guillaume Nicloux’s film is a slight Sunday night TV drama improved significantly by the prestige talent heading up this two-hander.

As the long since separated parents of a recently deceased son, Nicloux brings in two doyens of French cinema; Isabelle Huppert and Gérard Depardieu. Playing kind of but not really versions of themselves, they have been instructed to head out to Death Valley in California for a week by their dead son Michael. Just before committing suicide, he sent them both letters promising to return, albeit briefly, provided they follow a tightly worked schedule of dates and locations.

Such a wildly implausible claim is met with scepticism by Gérard, an ageing actor gone to seed. Facing fading health and ever increasing weight, he drags a bloated body around the sweltering heat, casting aspersions on the entire exercise. Isabelle holds out more hope. Still struggling with the temperature, she looks positively sleek is loose tops and sunglasses, and is much more accommodating of Michael’s demands. When Gérard complains, she shuts him up.

There’s plenty of complaining and a lot of shutting up in an enjoyable first hour. Very little happens as they sit under the scorching sun, sit at the bar, sit in the hotel room and sit in their car. There’s a lot of sitting. Huppert and Depardieu prove immensely watchable. Initially frosty, they start to open up, discussing their failings as parents, their old relationship and new lives. Nicloux wisely keeps to one side, only intervening occasionally to frame the blisteringly stark Death Valley landscape in the background, or to pull off a couple of well-executed long-takes, the camera trailing behind first Isabelle and then Gérard as they stroll the hotel complex.

Heavy handed imagery and a desperate lurch into the supernatural derail an otherwise pleasant ride. Death Valley itself becomes a painful symbol of resurrection, and strange signs begin to point to Michael’s presence, not least the odd marks left on his parent’s arms and legs. There’s talk of love and forgiveness, ill-health and good times, Valley of Love striving for meaning that’s not there. Briefly hanging out with Huppert and Depardieu proves an acceptable diversion. Just don’t expect them to end up anywhere.