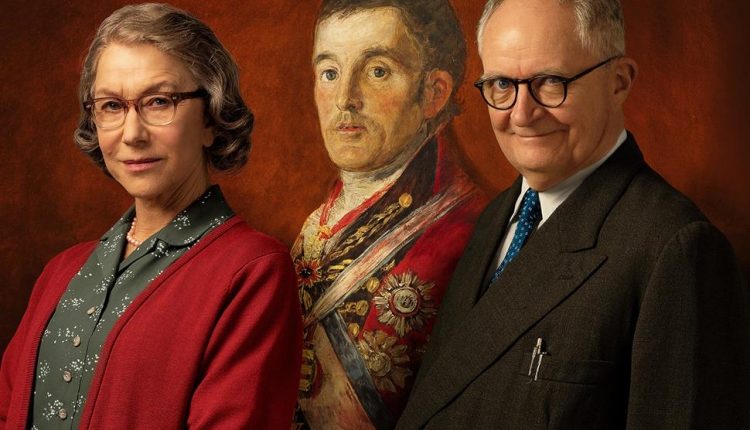 Jim Broadbent shines in a portrait of a man who acquires a painting with a five finger discount in The Duke.

Based on the true story of how in 1961, 60 year-old Kempton Bunton stole Goya’s Duke of Wellington portrait from the National Gallery.

The film begins with Bunton in the dock before flashing back to find out how he did it. Although don’t go in expecting an OAP Ocean’s Eleven… Ocean’s Eleveneses if you will? This is not your typical heist movie with scouting out venues, disguises, bait-and-switches, etc. Instead the film is more concerned with the man behind the crime. Examining how the consequences of his decision to take the portrait and ransom it back for the greater good… the greater good, affects his family. Idolising son Jack and doting but frustrated wife Dorothy.

Kempton Bunton is a man of the people. Whether it is sitting at home bashing out social realist plays to try and sell to the BBC or campaigning for free tv licenses for OAPs and war veterans. He wants what is best for the common man. To him, the painting, bought by the government with £140,000 of tax payers money, represents a chance to do something good. Holding it ransom for the same amount to pay for TV licenses for people cut off from society. A Geordie Robin Hood almost. Making the film akin to Ken Loach directing The Thomas Crown Affair.

Jim Broadbent is an absolute delight as Kempton. Full of bombast and bluster, with a twinkle in his eye, he is immensly watchable. Like a Goya hanging in a museum, whenever he is on screen you are drawn to him and his performance.

He might be the scatterbrains of the operation but the heart of the movie lies in his relationship with his wife played by Helen Mirren.

The two lost a daughter at an early age and it has created a void between them. Kempton fills that void with his social campaining. However in spending all his energy trying to help others, it comes at the expense of the woman he is closest too. Can his (paint)brush with the law make him see what truly matters before it’s too late?

Like a Goya masterpiece, they say they don’t make ’em like they used to pet. Yet Roger Michell’s enjoyable caper evokes the Best of British filmmaking with a hark back to the days of Ealing Studios and post-war kitchen sink dramas.

Designed as a crowd pleaser for the silver screen generation, it can feel a little paint by numbers at times. However thanks to the terrific central performances, colourful caper The Duke proves life certainly ain’t grim up north.