Writer-director David Cronenberg has this to say about censors: “Censors tend to do what only psychotics do: they confuse reality with illusion.”

That quote has been doing the rounds for some time, I’m not sure if those were his exact words or if he was paraphrased. The downside of living in the magical age of the internet is that it can become harder and harder to check the exact veracity of quotes and facts. For every piece of substantiation you can find numerous counter-arguments. The world wide web, entangling us in strands of truths, half-truths and outright lies for the greater good (“the greater good”).

Whether he said those EXACT words in that EXACT order or not, I think people familiar with Cronenberg’s work will readily believe that he at least said something like it. The man has had running battles with the censors for most of his film career, largely thanks to his favoured material – body horror – and the mix of sex and violence/death he provides audiences with, making the whole thing worse by presenting it with style and intelligence. How dare he!

Videodrome is one of his many masterpieces (I also LOVE The Fly, Dead Ringers, Scanners, A History Of Violence and Crash, and I like most of his other movies a lot). As well as being typically brilliant horror with some smarts to spare, it’s Cronenberg’s cinematic rallying cry against censorship. 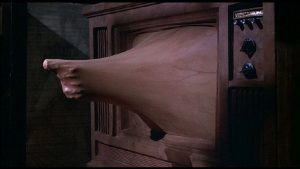 James Woods plays Max Renn, a TV programmer who is always looking out for the next big thing, the next ratings hit. He knows that he has to give people what they can’t find elsewhere and so he spends a lot of his time searching for more extreme shows to fill the schedule. When he stumbles across Videodrome he thinks he has hit gold dust. It doesn’t have any plot, there are no characters and the whole thing seems horribly real as people are tortured for reasons unknown. Max also thinks he has hit gold dust when he meets Nicki Brand (Deborah Harry), a woman who lives in a “highly excited state of overstimulation.”  Videodrome isn’t just an unnerving viewing experience, however. Oh no, it may be much more dangerous than that. As Max starts to hallucinate more and more bizarre visions, it looks as if Videodrome may be too much for anyone to handle.

Woods is great in the lead role, one of the best of his career thanks to what he has to work with and how well he does it. Harry is surprisingly enjoyable as Nicki Brand, giving a performance that must surely have had Blondie fans salivating when they first saw the movie back in 1983. Jack Creley may not be onscreen for long, but he has the best name in the movie, Brian O’Blivion. Sonja Smits is very good as his daughter, Bianca O’Blivion, Leslie Carlson is enjoyably unflappable as Barry Convex, a man in the know, and Peter Dvorsky is good fun as a pirate named Harlan who Renn uses to access TV shows from around the world. 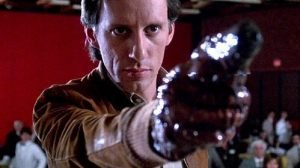 Cronenberg excels here, bringing together his usual mix of intellectual stimulation and nastiness in a tight hour and a half that blends the darkest humour with visions of extreme horror. Is he exploring the hold that television has over modern generations? Is he emphasising how ridiculous censorship is in the modern age? Is he, perhaps, just going down any path that allows him to come up with some more body horror? I like to think that he’s doing all of those things, creating a potent combination, a mind-bending, thought-provoking movie that’s also a lot of fun. In other words, he’s made yet another Cronenbergian masterpiece. 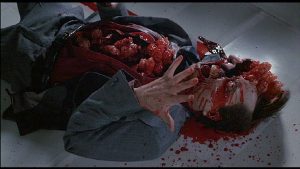