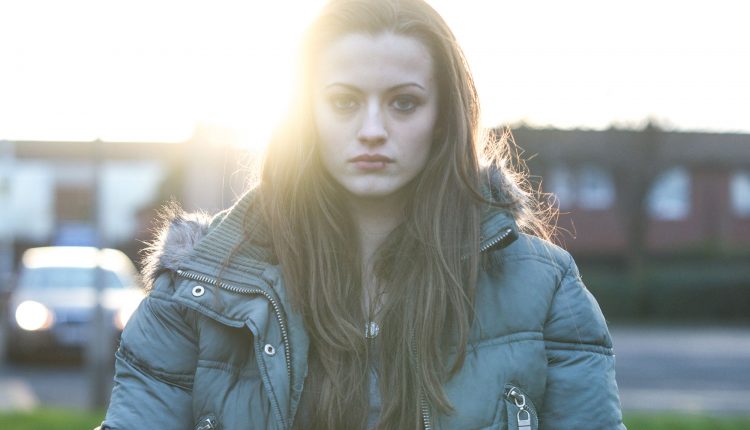 The Violators is a grim piece of British cinema, but it’s one that puts forward both the cast and first time writer-director Helen Walsh as ones to keep an eye on in the future. Reminiscent of the movies that we’ve seen from the brilliant Shane Meadows, the film only really gets dragged down by a sense of predictability and a sense that Walsh is holding back ever so slightly when she delivers her punches.

Lauren McQueen plays Shelly, a young girl being barely cared for by her older brother (Derek Barr) while she in turn looks after her younger brother (Jerome, played by Callum King Chadwick). When Shelly comes to the attention of Mikey (Stephen Lord) it looks as if things may take a turn for the better. Mikey is a tough guy, a local debt collector, and his interest in Shelley means a respite for her big brother, as well as some treats for Jerome. She then finds a strange friend in Rachel (Brogan Ellis), unaware that the girl has a twisted agenda. In fact, quite a few people around Shelly have their own reasons for wanting her company, except a kind-hearted young lad (Liam Ainsworth) who lives just across the street from her.

Nicely developed, full of a number of twists and turns (albeit predictable ones, as mentioned above), and with a constent undercurrent of violence seeming ready to explode at any moment, Walsh has given her cast something highly rearding to work with, and I’m happy to say that they all rise to the challenge. McQueen is a treat in the central role, all desperate petty criminal mindset and youth that has been damaged but not beyond repair. But her character is really fleshed out by the treatment she receives from others, and Ellis, Lord and Barr are all top notch, with Lord hanging over most of the movie like a storm cloud. Young Chadwick is easy to root for, making it easy to see why his sister is always looking out for him, and Ainsworth is very sweet. There are also small, but important, roles for Jennifer Hennessy and Roxanne Pallett. The more eagle-eyed among you may have already noticed that quite a few of the main cast members are ex-soap opera stars: Lord from Eastenders; Hennessy from Coronation Street; Pallett from Emmerdale; even Barr had a few episodes of Casualty under his belt, among his other credits. I only hope that more people as talented as this lot get the opportunity to work with such good material when they decide to transition from TV to film.

Not always an enjoyable experience, due to the nature of the material, The Violators will have you preparing for the worst and hoping for the best. It’s dark without being too bleak. It’s unpleasant without being tasteless. And it’s very good without quite becoming great. I’ll be very interested to see what Walsh progresses to next time.

NOTE: It’s worth mentioning that the Press & Industry screening of The Violators was marred slightly by a constant glitch that would cause the film to judder ever so slightly, much like it was buffering for 0.2 of a second when any movement was occurring. This was a minor niggle, but does mean that I cannot comment with 100% accuracy on the editing and transitions (in my opinion).