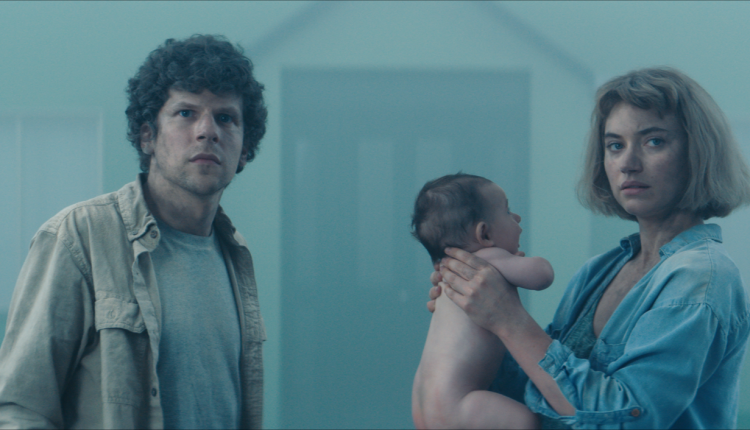 What a difference six months makes. When Vivarium screened at the London Film Festival in October 2019 it was favourably compared to the likes of Black Mirror. Fast forward to April 2020 and just like the best episodes of that show, truth is stranger than fiction. Because Vivarium has unexpectedly become a chilling, too-close-to-the-bone documentary of what happens when two people are forced to live together inside a house with no hope of escape!

To be fair, writer-director Lorcan Finnegan could not possibly have predicted that his film about a young couple trapped in purgatory would be released on Video on Demand to be viewed by film fans locked down at home due to the ongoing coronavirus situation.

Imogen Poots and Jesse Eisenberg play a young couple, Gemma and Tom, looking to take their first steps on the property ladder. Visiting a rather odd and forward estate agent, he takes them to Yonder. A new housing development made up of hundreds of cookie cutter start up homes. Unimpressed with the soulless, carbon copy nature of the house, they try to leave but find themselves trapped within an endless maze. Doomed to always find their way back to the house.

The reason for their sojurnment is unknown. They receive no information, no communication but do receive weekly food parcels and then one day… a mysterious parcel containing a baby.

Forced to spend every waking moment together, the cracks in their fragile relationship threaten to turn into gaping chasms. This is only amplified by the need to take care of this rapidly growing child. Gemma’s maternal instincts kick in, whereas Tom is happy to let the child go hungry and die. One might side with Tom too. Particularly given the intensely annoying scream that emits constantly from the mouth of the child (perfectly played by Senan Jennings).

Stuck in this Groundhog Day-style loop, the couple experience a similar emotional pattern of denial, anger, bargaining, depression and acceptance. Eisenberg and Poots are two of this generation’s most talented actors. Their committed performances allow for the audience to empathise with their experience.

The terror is in the mundane. The mind-numbing monotony is what could drive them to lose all hope before they figure a way out of this enforced lockdown. Yet at 97 minutes, Finnegan’s tightly-wound script and premise do not overstay their welcome.

Vivarium is the ultimate test of one couple’s relationship. One that many couples are going through right now. Which makes it the perfect and simultaneously inappropriate Lockdown viewing outside of Contagion!