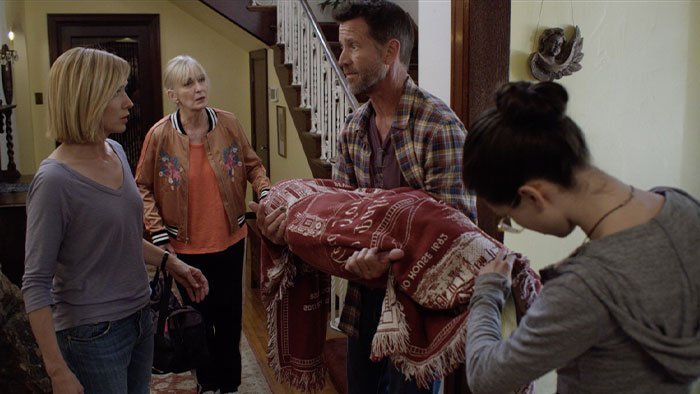 Love. Death. Fear. Parenthood. Companionship. Angst. Trauma. All these one-worded sentiments are skillfully woven into the seriocomical mixture of director Cyrus Mirakhor’s inventively off-kilter dramedy Wake. Ambitiously witty and oddly poetic, Mirakhor’s offbeat “traumedy” exhibits a display of unusual warmth and wackiness that allows this observational vehicle its soul-searching charm in the aftermatch of regrettable loss on many levels.

Mirakhor and screenwriter Carey Crim concoct a probing premise involving the exploits of a widowed mortician named Molly Harrison (Myndy Crist) battling with her agoraphobia demons as she is tightly bound to her home/business surroundings while crippled psychologically over the freak accidental death of her late husband Peter Lewis (comedian Jo Koy) three years earlier on her birthday. Clearly, Molly avoids living life at all costs as she a.) dutifully handles the concept of death regularly through her professional channels and b.) is afraid to death in venturing outside of her death certificate-induced domicile to face an unpredictable world. Poor Molly is trapped in a foxhole of fear and frustration as she refuses to let go of her emotional connection and affection for her belated and beloved Peter.

The house-bound Molly is now currently celebrating her fortieth birthday as her teen daughter Sam (Paige Searcy), mother Ivy (Caroline Lagerfelt) and funeral home assistant Frank (Paul Stroili) are on hand to acknowledge her special day. Predictably, Molly is not in such a celebratory mood as she has to bring in four decades of existence thinking about this dubious day when she lost Peter. Nevertheless, both Sam and Ivy try to snap her out of her funk by supplying her with a couple of birthday surprises: blessing her with a round trip ticket to travel to Russia with Sam and bestowing on her a gag gift of a life-size blow-up doll named Pedro (resembling her deceased hubby Peter of course).

Unfortunately, Molly’s daughter and mother could not accomplish convincing her to leave her doorstep which understandably disappoints Sam to no end. Molly won’t oblige Ivy in accompanying her to the doctor’s appointments either as Frank fills that role. Molly is hopelessly stuck as a prisoner in her home with the inability to trust her instincts outside of her enclosed walls. In the meanwhile, gag gift Pedro morphs into the real-life albeit an imaginary form of Peter. Soon, Molly’s attachment to Pedro/Peter has Sam wondering about her mother’s state of mind. Finally, Pedro serves as a weird purpose for Molly to engage her love again for the absent Peter.

Shortly both Molly’s and Sam’s life with change with the emergence of mourner Joe Fredrickson (James Denton), a handsome documentary filmmaker utilizing Molly’s funeral services for his estranged dead father. Joe is awkward and detached and finds stimulation in chronicling the existence of others through his pet projects yet finds no particular value in his own empty existence. Joe has one loyal love…his treasured dog. When his four-legged friend passes on Joe is truly lost.

Luckily, Joe forges somewhat of a fatherly bonding for Sam as she recognizes that the disillusioned guy has a discovered attraction for her mother. As for Molly, she is drawn by the good-looking, brooding Joe but does not want to readily admit her intimate urges with him although a couple of clumsy kisses here and there alerts the timid moviemaker. Through Sam, both Molly and Joe are encouraged to hook up for a first date and explore their mutual interest in one another. However, Molly’s continued agoraphobia (and her obsession with hanging on to the memories of Peter from plastic prop Pedro) threatens her budding romance with Joe. This is so defeating to Sam as she runs out of patience with her disturbed and distraught mother. Eventually, Molly’s reluctance to get over her fear of the outside world will have an unfavorable impact on those that she loves and cares for within her close circle.

Wake is infectiously giddy but also revealing and touching in its resolve to examining the state of loss and loneliness. Mirakhor’s quirky and candid confection boasts high-spirited performances in a pulpy story that aptly juggles its topsy-turvy overtones of pithiness and pathos. Lead Crist is effortlessly credible as Molly whose confinement and constraints to her psychological condition are marvelously effective. Denton’s Joe is also quite affecting as a man experiencing his own brand of low-key torture. Lagerfelt’s Ivy is a carefree tool that holds together simultaneously the hilarity and heartfelt moments. As Sam, Searcy is resourcefully spunky and perceptive as the seemingly deprived daughter. Koy is a cheeky revelation as the opinionated Joe guiding Molly’s confused and compromised psyche.

Consequently, no one can ever accuse Wake as a lacking dramedy deemed dead on arrival.