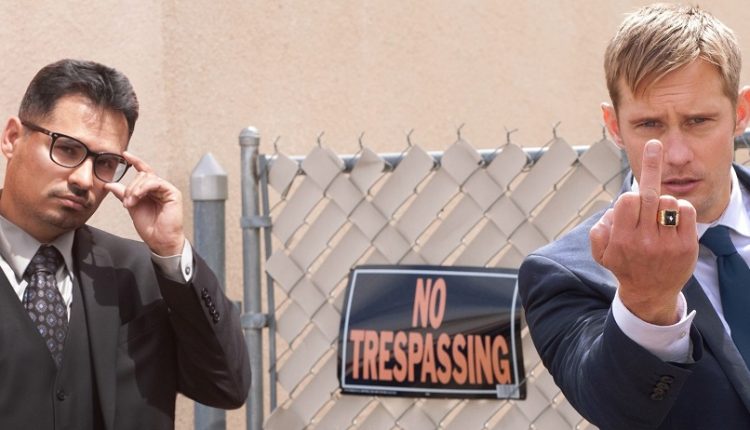 When I first saw the trailer for War On Everyone I knew that I wanted to see it ASAP. It had Alexander Skarsgård and Michael Peña being a pair of crooked cops. It had John Michael McDonagh as the writer-director (the man who gave us The Guard and Calvary). It made me laugh. I was sold.

Unfortunately, I didn’t get along to see it at the cinema. Meanwhile, more and more people started to tell me that it was a terrible film. It was juvenile nonsense, with few redeeming features. So I tried to dial my expectations down accordingly.

I needn’t have worried. This was another winner from McDonagh, and I hope more people give it a chance on the small screen.

The plot is quite slight. As already mentioned, Skarsgård and Peña are the leads, two crooked cops who seem to spend most of their time trying to shake down criminals for money and/or goods. It’s clear that they’re hanging on to their jobs by a thin thread, and that puts their focus on scoring a decent payday before retirement is forced upon them, in the best possible scenario. Things get complicated when they investigate a robbery that leads to them crossing paths with a majorly dangerous figure (Theo James). They get more complicated when an innocent young boy ends up in the care of Skarsgård, prompting him to be led by his conscience into a situation that looks less and less likely to end happily.

Here’s one way to look at War On Everyone. It IS juvenile nonsense. It’s flippant about the various abuses either depicted or mentioned onscreen. The whole thing is really little more than an excuse for Skarsgård and Peña to insult people, get into fights, and have fun acting like the most unruly police officers since either of the Bad Lieutenant movies.

Another way to look at it, and the way I saw it, is as a hugely entertaining comedy crime film that takes the tropes of the buddy action subgenre and subverts them at every turn. From Running Scared (1986) to Lethal Weapon, from the Rush Hour trilogy to Tango & Cash, so much remains the same from film to film. You will always get at least one of the main characters acting foolish, but it’s easy to forgive because they get results. Our main characters here aren’t interested in results, other than anything that improves their own lot in life. You’ll get the cliché of the angry boss who secretly likes his star employees, and vice versa. That’s not the case here. Paul Reiser plays the Lieutenant struggling to understand his officers, trying desperately to find a common ground in casual racism and pretending that he knows how they feel. Other clichés turned on their head include the loyal wife who needs extra protection when she’s not spending her time chastising her partner for taking too many risks, the shoot-out in which officers try to get bystanders to safety while apprehending their target, the by-the-numbers sympathy given to anyone who has just suffered a loss, and the cheeky informant who almost feels like one of the good guys (okay, admittedly, that last one is a cliché that is, by turns, adhered to and sometimes twisted).

While the entire cast do well in their roles, with Caleb Landry Jones, Malcolm Barrett, and Tessa Thompson standing out in supporting roles, Michael Peña is often working slightly in the shadow of Skarsgård. This is no slight to the former, it’s just a fact that the latter gets more of the better scenes, and he sinks his teeth deeply into every single one of them, clearly relishing the chance to cut loose and portray one of the most unhinged anti-heroes that we’ve seen in cinema in some time.

I have to end with another bit of praise for McDonagh, who drags every line of his acerbic screenplay through a puddle of mud and unpleasantness. This is a film that has fun with a lot of the violence being shown, yet it also does just enough, here and there, to shake people out of their numbed reveries (and that applies to both viewers and the main characters). The whole thing is a gamble, relying on a viewer to either go along for the ride or spend the brisk runtime eyeing up the nearest exit, and I applaud him for it.

War On Everyone is released today on Bluray, here in the UK, and comes with a number of small, fairly light, featurettes, and a commentary track by McDonagh.