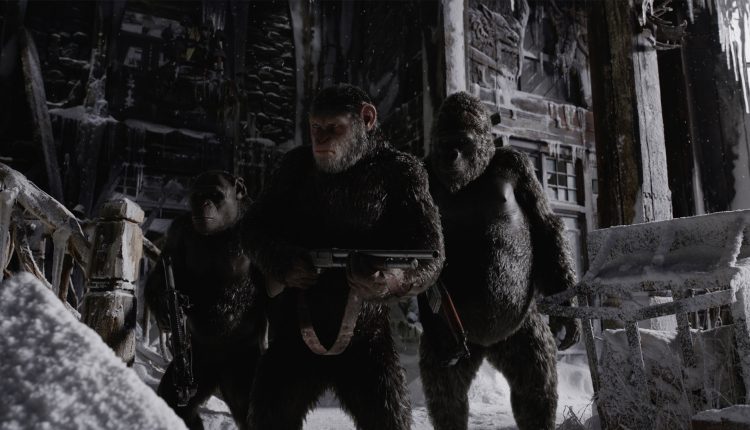 In 2010, 20th Century Fox confirmed an all-CGI reboot of the Planet of the Apes films, which was met with initial scepticism. By then, the original series starring Charlton Heston was more than 30 years old and already an established sci-fi film franchise. Director Tim Burton didn’t help alleviate fans’ fears’ with his poorly received remake in 2001.

However, the studio took a gamble on husband-and-wife screenwriters Rick Jaffa and Amanda Silver, who had created a concept that involved genetically enhanced chimps, to revitalise the series. 12 years and two instalments later, Matt Reeves returns to the director’s chair to deliver the third instalment in this now-acclaimed series.

War for the Planet of the Apes follows the events of Dawn, which saw the traitorous ape Koba (Toby Kebbell) launch an attack on the humans, rather than abide by Caesar’s (Andy Serkis) attempts for peace. Now struck by personal tragedy, Caesar is now driven by revenge against the humans who are now led by a merciless soldier known as The Colonel (Woody Harrelson),

One of the key points about the reboot film series so far is the slow, evident development of the distrust between the apes and humans. The original series had a clear premise: it was a battle for Earth against each other – the concept of peace between them was never an option. However, the new series provided a clean slate to allow this mistrust between the two to develop naturally. 2011’s Rise of the Planet of the Apes planted the seed of doubt about humanity in Caesar’s mind and 2014’s Dawn of the Planet of the Apes sees this distrust flourish among his own kind. Now, the films come full circle as he is now forced to face the inevitable – that cohabitation on Earth is impossible.

In addition, all three films in the modern series tend to side with the apes. The old films presented them as a threat, an oddity that saw man as a lower form of species. Here, they are the ones pushing for peace and only fight as a form of defence, rather than offence. The introduction of young mute girl (Amiah Miller) among their group also brings out an emotive side to the characters, as she manages to keep Caesar’s ‘humanity’ through her innocence. Allowing the story to develop from their perspective enables the chimps to provoke more empathy when compared than the human characters in the film. In contrast, the Colonel is as cold-hearted and merciless as a villain can get. With Harrelson delivering his most intense performance since Natural Born Killers, the character resorts to slavery and starvation and is maniacally set in his mission to preserve the human race. While also driven by his own experiences, his drastic intentions ultimately cloud his judgement and put him on a dark, inescapable path.

The script by Reeves and Mark Bomback is primarily driven through Andy Serkis’ withered Caesar in his most vocal performance in the series so far. The idea of Caesar delivering a large portion of the dialogue is a stroke of genius, as it allows him to not only be the key connector to not only the humans and the apes, but also to the audience. Serkis plays Caesar brilliantly, continuing to show off his natural talent as a performance capture actor by conveying the character’s conflicted emotions and the weight of being the de facto leader of the apes through his expressive eyes and body language. The film’s supporting cast is also great, especially Steve Zahn’s comically awkward Bad Ape and the sweet, ingenuous Miller, who both prevents the film from being completely bleak and serious.

Combining elements of a war film (revenge, hope and the need for survival) with a modern, creative eye, Reeves ups his directorial game to create a poignant, emotionally charged film. With small salutes to the original 1968 film, he is effectively bringing the whole series full circle while allowing audiences to reflect on what Caesar and his tribe have had to endure to get there. It’s an emotive, fraught journey towards peace but it’s one that is both stirring and visually glorious.

Emotional, action-packed and beautifully shot, War for the Planet of the Apes delivers something that some film franchises have failed – a brilliant threequel.