The line between fact and fiction can be a precarious, thin affair when it comes to film. More often than not, it’s the fabrications, the neat little dramatic touches, that make the picture memorable, and which usually turn out to be artistic license. But when a true story is as compelling and important as director Katja Benrath’s Watu Wote, such tricks become redundant, in the face of a series of facts so incredible that you almost couldn’t make it up. 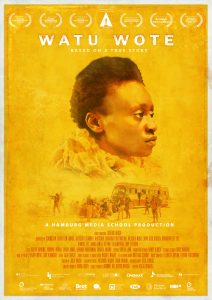 For more than a decade Kenya has been targeted by terrorist attacks of the Al-Shabaab, a Somalia-based militant Islamist group aligned with Al-Qaeda. Because of this, an understandable feeling of animosity and divide has grown between the Muslim and Christian communities.

Watu Wote depicts an event that took place in December 2015, when a bus carrying both Muslim and Christian passengers was besieged by members of the terrorist sect, who were intent on executing any Christians on-board. In an astonishing act of bravery, the passengers concealed the identity of the Christians, leaving the gun toting militants unable to complete their mission.

As crafted through Julia Drache’s superbly restrained screenplay, the film chooses to focus on only a handful of characters, specifically Christian woman Jua (Adelyne Wairimu),who is leaving Nairobi for Mandera County, and teacher Salal Farah (Abdiwali Farrah), a Muslim with a family waiting for him back home. 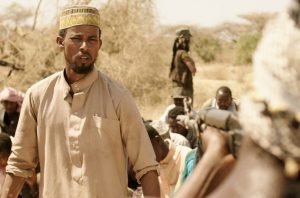 Given the fact that their actions could have easily led the Al-Shabaab (who’s name literally and rather chillingly translates as ‘the youth’) to slaughter everyone on board, for refusing to cooperate, this one act is a powerful symbol for the inherent goodness of the human heart. Beyond religious divides, the chance to save one life at the risk of thirty others

Politics can often overwhelm a story like this, leaning too far one way or the other. Watu Wote doesn’t have such problems. Rather than be didactic, the film focuses on the passengers on the bus, the people, the anonymous faces, the kind we see every day.

More importantly, the relationship between Jua and Salal provides an actual story to go hand in hand with the situation. Indeed, his fate also determines her future, and a coda at the film’s close is both heart-warming and bittersweet.

Technically, the film is superbly lensed by Felix Striegel, who keeps the scenes, in the blazing sun, crisp (you can see every bead of sweat on the brows of the characters, good and bad) while the night-time sequences, all exterior, allow for bursts of colour, be they from a burqa or a spotlight. Hand held when it needs to be, yet also elegant, you feel more a passenger on the bus, than part of an observing audience, and this is the film’s master stroke, immersing you in an experience that terrifies and sets the pulse racing better than any gimmicky 3D experience ever could dream.

More immersive still are a clutch of performances so natural that you’d be forgiven for thinking that the film was a documentary. There are no grandstanding speeches, no action set pieces.

When a bullet is fired, its terrifying. When it meets a target, it hurts.

Wairimu can say more about her character with expression than with words, while the militant group, consisting of frighteningly convincing young men, includes Faysal Ahmed, who played a similarly terrifying Somalian pirate in Paul Greengrass’s Captain Phillips.

And yet, as cliché as it might sound, Watu Wote is not a film about terrorism. It is about normal people, trapped in an impossible situation, in a world that, more often than not, turns its back and looks the other way.

The title translates as All Of Us, and for once, the sentiment rings true.

They may feel beyond help, but they are not beyond hope.