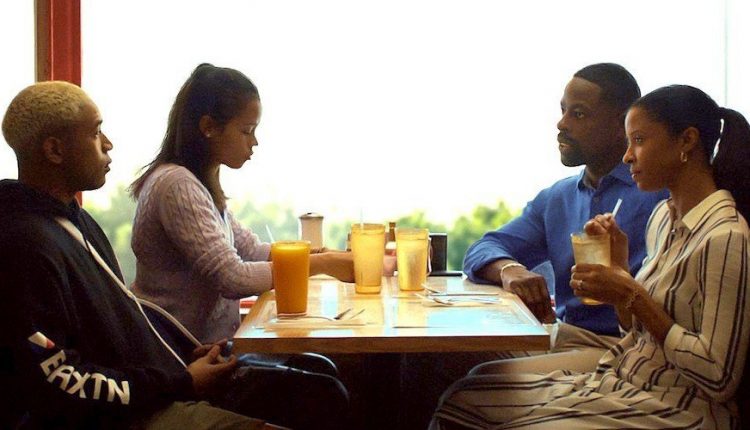 In cinema, the family dynamic has always been tailor-made for a fascinating journey into the dramatic mindset of interpersonal relationships within a combustible household. Writer/director/co-producer Trey Edward Shults presents such a penetrating familial drama in the absorbing, ensemble-based narrative Waves.

This melodramatic observation of a South Florida African-American family navigating through turbulent times of adversity is quite masterful from an emotionally explosive perspective. Within recent years the landscape of revealing black-centric family fare such as riveting gems “Moonlight” and “If Beale Street Could Talk” had captured the raw imagination of the fragile family unit gone detached but still fortified with a sense of empowerment and purpose. Aptly, Waves is personified in the poignancy of its perceived disillusionment. Heart-wrenching and beautifully executed in its vibrant schemes of color and complexity, Shults has constructed a storytelling method that is uniquely solid in its consciousness and conviction.

To state that Waves is a hard-hitting, soul-searching family drama laced in its contentious confines would be an understatement. Shults effectively puts forth an ambitious exposition mired in intimacy, inspiration, and intensity. Thoroughly moving and introspective, Waves crashes to its shore with affecting force as it recognizes its sheer impact on the psychological makeup of its dysfunctional family foundation. This thought-provoking film invites the audience to dissect the triumphs and tragedies of a particular clan clouded in a compelling malaise of setbacks. Creatively, Shults has assembled a capable cast of performers that are able to convey the surfacing frustrations that invade the tainted psyches of fathers, mothers, sons, and daughters. Waves is impenetrable in its immediate resolve for domestic resolution.

The universal theme in Waves stems from the masculine toxicity and the high expectations that are a result of such a stronghold. Ronald Williams (Emmy-Award winner Sterling K. Brown, “This Is Us” TV series) is an accomplished man in business owning a construction company. He and his guidance counselor wife Catharine (Renee Elise Goldsberry, “The Immortal Life of Henrietta Lacks”) are dutifully raising their children in the Miami suburbs. The Williams offspring Tyler and Emily (Kelvin Harrison Jr. and Taylor Russell) are the typical siblings that march to the beat of their own drum. Tyler is a star high school senior wrestler and an athlete that enjoys good grades in school. He seems to have it all — good looks, an attractive girlfriend Alexis (Alexa Demie, “Moonlight”) and financially solid family backing. Emily, on the other hand, is the little sister whose reserved nature allows her to mostly adhere to her own company.

In particular, Ronald has high hopes for his son Tyler as he stresses excellence at every level. Not one to tolerate mediocrity Ronald lets it be known to Tyler that he has to strive in staying on top of his game. Thus, Tyler is subjected to excruciating workouts in order to be considered disciplined. In fact, Ronald occasionally joins his son in these punishing routines as a means for motivation. According to Ronald, no son of his is going to settle for being just ordinary. Ronald knows no boundaries when it comes to ensuring that Tyler is top-notch all-around as that bright future is right around the corner for the taking. After all, how can it be such a bad thing for an attentive–albeit overbearing–father to bond and embolden his talented son?

However, bad news strikes when a serious shoulder injury befalls the panicky Tyler. This presents a problem because Tyler cannot afford to demonstrate a sign of vulnerability especially on the demanding Ronald’s watch. Physical weakness should not be tolerated and Tyler is aware how this unfortunate medical turn of events could disappoint his adamant father. Tyler fears not only looking weakened in Ronald’s eyes but realizes that his wrestling career may be jeopardized as well. Something has to give and quickly before Tyler’s woeful medical revelation is exposed.

And so the downward spiral begins to unfold as Tyler engages in desperate behavior to cover up his mounting inadequacies. The once treasured teen is now a former shadow of himself. Drugs, drinking and other kinds of debauchery has now overwhelmed this promising student athlete. When the unsettling news of Alexis’s pregnancy is revealed Tyler becomes engulfed into a menacing tail spin of self-destructive anxiety. Tyler Williams is now a walking wrecking ball whose crippling collapse is quite telling to say the least.

When the film shifts gears to Emily, we are subjected to her brand of angst-ridden turmoil. As the tragic incidents hover over the family, poor Emily feels even more isolated than before. Already feeling rather ostracized at school, Emily is finally enlightened when she hooks up with an affable wrestler named Luke (Lucas Hedges, “Moonlight”). Apparently Luke is lost as his personal demons with his own father correlates to addiction and abandonment issues. So the common threat of understanding that draws Emily and Luke together are their wounded ties to disillusioned daddies and their accompanying flawed predicaments.

While set against the backdrop of sunshine-filled tranquility, Waves has a rippling effect in its ironic ode to familial mayhem. Shults’ challenging direction and intuitive script skillfully handles the weighty concept of family-oriented strife as orchestrated through a disturbing story that provides a hypnotic glare into the nucleus of loving unions. The boldness of this character-driven drama escapes its conventionality in large part to the extraordinary performances that are displayed with such compassion. The film musters up a stimulating dilemma that exudes the underlying indifferences, silent resentments, and pent-up hostilities that unassumingly handcuff even the best polished families. As always, Brown brings an earthy edge to his roles and pushy patriarch Ronald Williams demonstrates this very notion. Newcomer Russell is quite amazing as the conflicted Emily undergoing growing pains in the wake of restrictive alienation. Harrison Jr. applies a convincing stamp of confidence and confusion as the hotshot high schooler Tyler reduced to a shambled shell of shame.