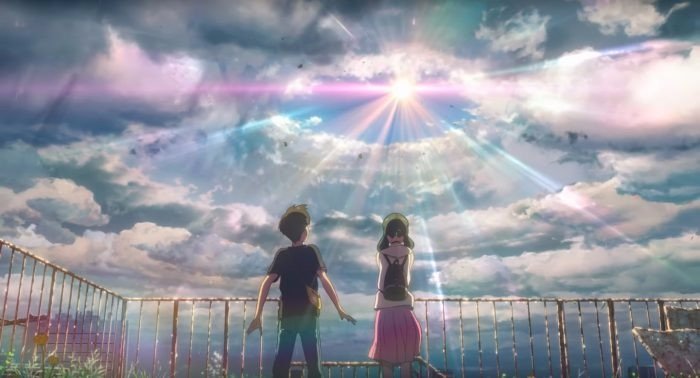 In 2016, Japanese filmmaker and animator Makoto Shinkai made waves with romantic fantasy drama Your Name. It was not only acclaimed worldwide but it has spawned plans for a live-action remake. Now, Shinkai returns with his latest feature, which is currently Japan’s highest-grossing film this year.

Weathering With You takes place in Tokyo, which is experiencing torrential rain. Teenage runaway Hodaka (Kotaro Daigo) befriends a young girl Hina (Nana Mori), who has the power to control the weather.

After the success of Your Name, a follow-up was always going to be a challenge. At first glance, Weathering With You and Your Name feels like part of an expanded universe as they share many narrative elements. A fantastical romance amid the bright lights of modern-day Tokyo come across as cinematic deja vu – along with a small-town teenager’s POV of city life, it is hard to distinguish the two films.

However, Weathering With You ambitiously tries to offer more than its budding romance through supporting characters such as Hodaka’s boss Suga, his niece Natsumi and Hani’s brother Nagisa. They bring comedic moments and emotional support but they ultimately have underdeveloped narratives. As a result, their presence and other elements create plot holes that remain unanswered. In addition, Hani and Hodaka’s approach to independence betrays their youth and naivety to independent life, which only makes them bigger risks to the real world.

In addition, Weathering With You‘s serious themes become confused amid its fantastical elements. Its shots of dark and gloomy rain-soaked streets provide a nod to climate change, as well as a metaphor to audiences hoping for brighter times. This also feeds the legend behind ‘the weather maiden’ – the proverbial ray of sunshine that Tokyo needs.

Visually, the animation is second to none as Shinkai beautifully balances the hectic, neon-lit streets of Tokyo with stunning sunshine-filled scenes. Nani is also an endearing heroine whose willingness to share her ‘gift’ shows her selflessness towards others while Hodaka’s determination to help her shows his good-naturedness. However, Weathering With You‘s ambition ultimately overwhelms it, leaving a sense of disappointment by the time the credits roll.

Overall, Weathering With You is beautifully animated and has lots of heart but it just falls short of the majestic wonder of Your Name.

Weathering with You opens in UK cinemas on 17 January.