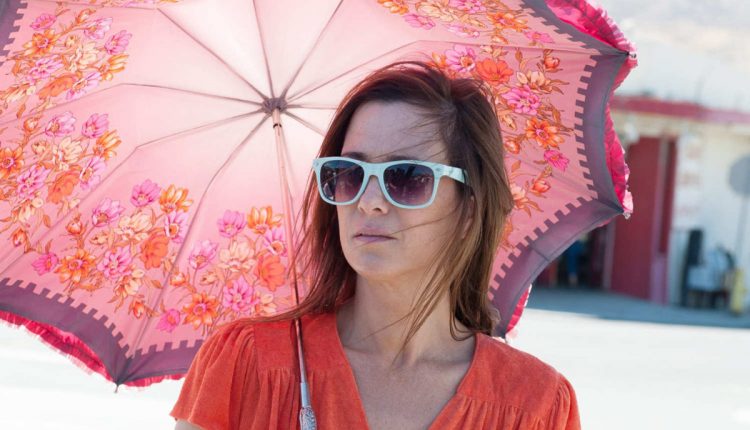 When set free, there’s something genuinely unhinged about Kristen Wiig’s performances. Of all the members of the new comedy royalty currently reigning on big and small screen alike, she’s the least predictable. Where Tina Fey brings biting wit, Amy Poehler infectious energy, and Melissa McCarthy just pure like-ability, Wiig comes with a lot of jagged edges. It’s this permanently on the precipice persona that elevates Welcome to Me above shaky foundations.

Wiig plays Alice Klieg, a mentally ill woman with an Oprah Winfrey obsession and only one friend (Linda Cardellini’s Gina). A life of scraping by on disability benefits, medication and regular therapy sessions with Daryl Moffat (Tim Robbins) is turned upside down when she wins $86 million playing the California Stack Sweepstakes, a fortune that it’s safe to say she is not likely to spend wisely. After making a somewhat inappropriate speech on local TV that is abruptly cut off, she moves into a casino with Gina and via a series of increasingly out of control decisions, ends up paying a local TV station run by Rich (James Marsden) and Gabe Ruskin (Wes Bentley) to let her host a show.

The question running through all of Shira Piven’s film, written by Eliot Laurence, is how much of Welcome to Me is comedy and how much is drama. At no stage is this ever clear. Her TV show features bizarre re-enactments of youthful slights, an out-of-tune theme song performed by Alice and sections ranging from inedible cooking to nasal predictions and live dog castration. Off-set isn’t any less odd as Alice starts an unsettling relationship with Bentley’s damaged Gabe, seduces a student fan (Thomas Mann), and drives away family and friends with her narcissistic obsessions.

Full of grey areas, the lurches between dark comedy and even darker drama become almost impossible to tell apart. Shots of Alice in tears in a recording booth are probably both, though it really comes down to the temperament of the viewer. Laurence certainly doesn’t signpost switches. The darker your sense of humour, the funnier it’s likely to be. Equally, the whole thing can come across as incredibly depressing. It’s certainly brave, and possibly doomed to failure if not for the superb casting of Wiig.

With a deadpan stare, awkward hand movements out of time with events around her, and a wonderful ability to blurt out the most unlikely lines with utter sincerity, she creates a mentally ill character that is funny without veering into exploitative. When momentum occasionally disappears down rabbit holes, it all hinges on Wiig’s ability to carry long stretches of absurd and disturbing behaviour.

That she towers over everyone else is not entirely her doing, good as her performance is. With a supporting cast that includes Robbins, Cardellini, Bentley, Marsden, Jennifer Jason Leigh, Alan Tudyk and Joan Cusack, the fact that they all prove so unmemorable highlights further weaknesses in the screenplay. Everything is devoted to Alice at the expense of all other pieces, leaving a collection of hollowed out rocks circling her sun.

Welcome to Me is an odd and only partially complete proposition. Confusing the line between comedy and drama, it’s left to Wiig to ride over rough patches. Luckily for everyone involved, she’s more than capable, turning a potential mess into a moderate success. These last few years, she’s found her zone. The longer it lasts, the better.