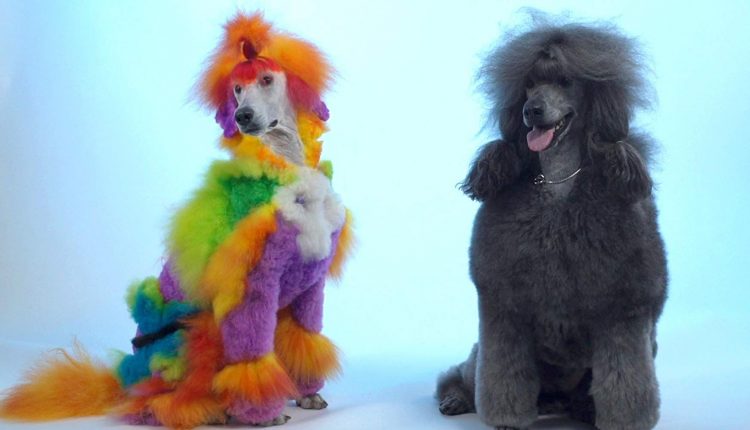 As they say, only in America could you find something as trippy and, lets be blunt, downright bonkers, as creative dog grooming. Though this eccentric pastime – involving dyeing your pet canine’s hair a rainbow of psychedelic colours, then sculpting it into a variety of outlandish shapes and designs – is practised worldwide, it is surely in America, the land of the bizarre, where it has found its spiritual home.

The processes involved in preparing a dog for the highly competitive world of creative grooming – from hours concocting evermore outlandish ideas to carve into their fur, to the time-consuming techniques of colouring it – may at first appear weird, even frightening, to the outsider. However, as the film shows, this land of acid coloured dreams is, for those involved, one of almost freakish devotion and highly creative, artistic expression.

You could claim the four women – Nicole Beckman, Angela Kumpe, Catherine Opson and Adriane Pope – who the film trails as they criss cross America competing in dog shows, are kooky, as obsessive about their relationships with their pets as they would be about any with humans. Remarkably though, they all come over as quite sane, pleasant (if slightly over-the-top) individuals, with grounded family lives and successful dog care / grooming businesses built on the back of their unique pass-time. In-fact, though their partners and children sometimes carry an air of bemused resignation about the women’s devotion to their pets, they are none-the-less wholly supportive of their endeavours.

The only really disturbing question which arises, and which is only briefly alluded to, is the effect the creative grooming process has on the dogs themselves. Some will claim that colouring and primping an animal is unfair to a creature that can’t speak its own mind or communicate its displeasure. However as Catherine Opson explains, when quizzed on the subject, dogs can make their feelings strongly felt – she has one which evidently doesn’t enjoy the process, and she’d never force it to be involved.

Previously shown late last year in a shorter 58 minute version on the HBO Sports label (I suppose, at a stretch, the hobby of dog grooming could qualify as a sport), you could say the 88 minute version feels overstretched. Many documentary subjects, by their very nature, are better suited to a punchy, hour long format, and feel padded out when extended to fill a longer slot. This though is the only quibble about an otherwise intriguing look into the crazy, fascinating world of creative dog grooming. You’d be barking mad to miss it.

Well Groomed is now available on DVD and all major VOD platforms.