Donald Cammell’s third feature, White of the Eye – his only film of the 1980s, made between the 1977 insemination sci-fi Demon Seed and 1995 pulp thriller Wild Side – is an interesting attempt to make a slasher movie without any conventions of the slasher, instead focusing on the fraught domestic life of a serial killer (David Keith) and his unsuspecting wife (Cathy Moriarty), keeping the grisly nature of his work – which we only glimpse in two stylish, giallo-inflected set-pieces – on the periphery of their relationship.

Cammell belongs to the same school as Richard Stanley and Philip Ridley, film artists whose unique, often impenetrable visions have clashed with studios and resulted in a frustratingly small number of films, and the director’s renowned stubbornness has seen projects rejected and abandoned over three decades, finally leading to his suicide in 1996 over the studio-mandated re-cut of Wild Side. So I’ve no doubt that White of the Eye is exactly the film he wanted to make, but why, and what he’s trying to say with it leaves much to the imagination. Despite an amazing restoration from the reliable Arrow Video, it’s a shockingly dull rediscovery from an otherwise remarkable director.

The film’s biggest problem is its incongruous mix of murder mystery and Henry-esque character study, as it conspicuously attempts to conceal the identity of the killer (even including a police investigation led by Art Evans) while concurrently building a profile of protagonist Paul White (Keith).

The opening set-piece – an exhilarating montage of dilating irises, claret and goldfish – is shot from the killer’s POV, a classic slasher/giallo staple (and as Sam Ulan notes in his commentary, the typical setup of a murder mystery), but Cammell and his co-writer (and wife) China are so dedicated to avoiding generic tropes that they go forty minutes without introducing any red herrings or establishing motive, instead focusing on Paul – whose arc is replete with flashbacks, in bleached stock, to suggest the beginnings of his fractured psyche – so that there’s no question as to who committed the murders, and the film sabotages its third-act attempts to get inside the mind of the killer (whose degeneration into a rampaging barbarian just comes off as ridiculous) by having withheld his participation in the slayings for so long.

Both stories present potentially interesting subjects, as the first murder scene is decorated – in blood, Tupperware and modernist furniture – like one Picasso’s cubist paintings, and this seems to be the lead on which Evans’ Detective will base his investigation. The idea only re-emerges in flashback, in a chilling scene when Paul snaps and contorts the carcass of a deer into an abstract design, and what at first seemed like a convincing way to connect the mystery narrative with Paul’s psychological profile (is he a frustrated artist taking out his rage on the Tucson elite, who live above the city in their elegant desert apartment blocks, or perhaps murder is his art?) turns into a loose end the film never ties up.

Paul’s actual reason for killing is revealed late into the third act, by which time we have been re-introduced to Mike (Alan Rosenberg), his wife’s ex-lover, who it becomes clear will have to save the day. This framing device at least introduces some drama into the narrative, but Mike is such an unsympathetic character in flashback – as he must be, to convince us that Cathy would leave him for Paul – that he feels limp as the hero, and the scenes where he and Cathy are reunited are hampered by some of the film’s worst writing (not to mention the TV-movie-of-the-week acting which runs through this cast top-to-bottom).

Atmospherics are provided by composer Rick Fenn and Pink Floyd’s Nick Mason, with DP Larry McConkey lensing the rough Arizona desert in beautiful shades of yellow and orange. Cammell’s use of irregular angles is also interesting, especially in the murder set-pieces, but these stylistic flourishes are few and far between, and from an auteur who spent decades between projects, a perfectionist who created great art amid chaos, who himself was such a fascinating cult figure (as newcomers will discover in the extras), such a flat and muddled film comes as a crushing disappointment. 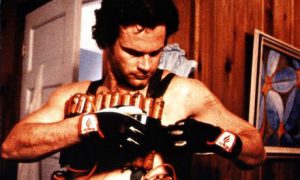 The highlight of the Blu-Ray is Kevin Macdonald and Chris Rodley’s 1998 BBC documentary Donald Cammell: The Ultimate Performance, an insightful piece which illuminates Cammell’s early life and extensively investigates his collaboration with Nic Roeg on Performance, featuring interviews with Roeg, Kenneth Anger, and China Cammell. The most fascinating element is the discussion of Cammell’s obsession with suicide, and his Dissociative Personality Disorder, which resulted in “The Uncensored Don”, a secondary personality who “directed” his films – this observation could be the connective thread of his art, and the doc is essential for those new to Cammell’s work.

Also included is the unfinished 1972 short The Argument, shot by Vilmos Zsigmond, complete with commentary by Cammell biographer Sam Ulan, who also provides a (rather dry) feature commentary. There are two deleted scenes and an interview with DP Larry McConkey to round out the package.