There are many times when two movies are released that tend to be covering very similar ground. It happened with Dante’s Peak and Volcano, it happened with Armageddon and Deep Impact, it happened with Antz and A Bug’s Life, and now it has happened with Olympus Has Fallen and White House Down. Both of these movies were released in 2013 and both of them are action movies that use an attack on the White House as an excuse for some far-fetched entertainment. However, while the former movie wasn’t afraid to keep things simple and a bit gritty, White House Down tries to present events in a much friendlier, slightly comedic, way. It’s not exactly a film for all the family, but it certainly tries to have something for everyone.

Channing Tatum is the action hero this time. He’s trying to get a job on the Presidential detail, but the woman interviewing him for the position (played by Maggie Gyllenhaal) knows him all too well, and doesn’t think that he’s right for the job. At least the day isn’t entirely wasted, as he gets to spend some quality time with his daughter (Joey King) on a tour of the White House. They even get to briefly meet the President himself (Jamie Foxx). And then it’s a crash, bang and a wallop as armed men burst into the famous building and start to hunt for the President. Tatum’s character just wants to make sure that his daughter is safe, but he’s also in a position to also try to protect the President. 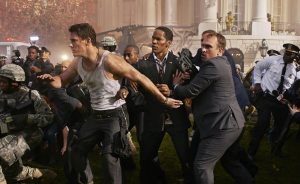 While the direction from Roland Emmerich is just fine, and the script by James Vanderbilt does the job, there’s just a flatness to White House Down that is never successfully eradicated. In fact, you know that you should worry when the highlight of the first half comes in the form of an in-joke referencing THAT White House moment from Independence Day. The action is enjoyable enough when it starts to happen, but it never really feels like enough, mainly because many of the action beats are either over too quickly or just not serious enough for viewers to believe that the good guys are ever in any danger.

Tatum is good enough in his role, believable in all of the more physical moments, and he’s always likeable and easy to root for. Foxx is also good, although it’s a shame that his character never feels very Presidential, what with him being the President and all. James Woods is the highlight, stealing almost the entire movie thanks to his fun performance, while Gyllenhaal tries to do her best with a role that sees her sidelined for a lot of the movie. Richard Jenkins is very good, Jason Clarke is suitably mean, Joey King manages to be savvy without being too annoying, and Jimmi Simpson does, well, what he usually does.

This may be the lesser of the two White House action flicks from 2013, in my opinion, but that won’t stop it doing decent business in the home entertainment market. Men can at least enjoy some of the action beats while a lot of women will be happy enough to watch Tatum running and jumping around for the duration of the movie. As mentioned at the start of this review, it’s almost fun for all the family, which is ultimately what weakens it in comparison to other action movies.