There is a moment in Wind River, in which a character tries to console a father over the loss of his daughter.

“If you shy away from the pain of it, then you rob yourself of every memory of her”, he states, before adding, most poignantly, “Take the pain, its the only way to keep her with you.”

Wind River is filled with such moments, and it is a testament to the independent spirit with which the film has been crafted, that such character beats, and such bleak truths, are allowed to breath within the familiar patterns of a well worn genre.

Taylor Sheridan is arguably the most reliable writer working in American film and with this, his second turn as director, he proves a natural at handling all aspects of his story, from conception to execution.

And there is plenty of execution to be found within the narrative itself.

Ostensibly a murder mystery, set in the stark, snow clad beauty of Wyoming, the body of an 18 year old girl is found within the Wind River Native American reserve, sparking an investigation, led by FBI agent Jane Banner (played by Elizabeth Olsen). 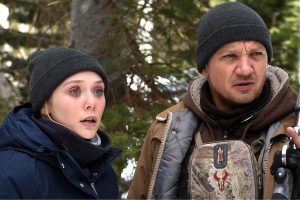 Key to both the investigation, not to mention the legal politics of the land on which the crime has been committed, is Cory Lambert (Jeremy Renner), a hunter, whose tragic past makes him the perfect person to aid the rookie agent, whose assumptions about the procedures of the Native American authorities prove to be fascinatingly naïve.

Indeed, the great strength of Sheridan’s story is his focus on the practicalities of such procedures. Woven into the plot are issues of racism, culture clash and, most interestingly, how a coroner’s report can mean the difference between murder and misconduct.

Refreshingly free of cliché, there is not a hint of romance between the film’s leads, the sort of conceit that in lesser, more studio driven thrillers, would be a given. Instead, the film focuses on a notion of loss and the redemption that can be found within family, creating an emotional through line of immense effect and power, most of which is down to Renner, who gives a performance of both great warmth and old school machismo: his Cory a man torn between a past he can’t let go of and a future that seems uncertain.

Think Clint Eastwood, but one that would be safe to hug.

Elsewhere, the cinematography, by Ben Richardson, makes magnificent use of the Wyoming locations, particularly in the night sequences, which play the whitest snow off the darkest shadows. You feel every minus in the temperature, every breath the characters take, be it their first or last. 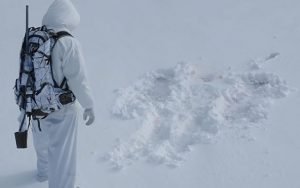 The use of Nick Cave and Warren Ellis for scoring duties also works wonderfully, giving the picture a kinship to other wilderness dramas of recent years, such as The Proposition and The Road.

Indeed, Wind River feels almost like a Cormac McCarthy tale, albeit one with a little more heart and optimism.

Sheridan explores intimate drama in epic locations, stories fused with a wild west sensibility, but a contemporary relevance. As he showed within his screenplays for Sicario and Hell or High Water, he is a film maker interested in the dynamics of human behaviour, not to mention the brutality of nature versus nurture. As such, his directing style is almost invisible, a no nonsense approach that never intrudes upon the story, yet still manages to cast up some memorable imagery, particularly a surreal moment of a spider crawling across the snow which seems throwaway, yet is ripe with significance.

Instead, it reminds you just how magnificent the wheel can be.

Wind River is available on digital download now, and on DVD/Blu-ray from January 22nd, 2018.

The DVD/Blu-ray contains two deleted scenes and a selection of behind the scenes featurettes.