Hugh Jackman returns to his signature role (with this being his sixth time wielding those adamantium claws) for the first time without any X-tensive support from his fellow X-Men. Oh, there are one or two cameo roles, but this is a Wolverine movie that strips everything down to the bone, especially the main character (literally).

Director James Mangold, working from a script by Mark Bomback and Scott Frank (who had a wealth of great comic book material to pick and choose from), gave viewers a film that emphasises just why Wolverine always has such a chip on his shoulder. With so much death and destruction around him, and one death in particular, his own indestructibility causes him no end of frustration. Mortality is what Wolverine seeks, but that also means vulnerability and pain, neither of which are welcome when our hero finds himself up against numerous skilled, and determined, foes.

That’s really the essence of this movie. I’m not going to go into more about the twists and turns of the plot, because the film tries to provide one or two surprises on the way to the end credits. The surprises aren’t surprising, in the slightest, but it’s still not up to me to spoil anything for others. All you need to know is that Wolverine battles a lot of people in Japan while he tries to figure out how he can become “normal” again. 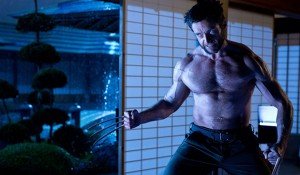 The way that the script deals with the thoughts and motivations of the main characters is the biggest plus point here. Although this isn’t a film for people who need a fight every ten minutes, the mindset of Wolverine is dark and interesting to explore. Having said that, there are also one or two decent action sequences. One, taking place on a speeding bullet train, just may well be one of the best action sequences in a mainstream American movie in 2013. I can’t say for certain, but I’d put good money on it.

Unfortunately, some of the rest of the movie falls flat. Most of the supporting cast, in terms of both actors and characters, just don’t make any impression, with the main exception being the character played by Svetlana Khodchenkova. Tao Okamoto, Rila Fukushima and Hiroyuki Sanada all do solid work, but you’re likely to only remember Khodchenkova when the end credits have rolled. Jackman is, of course, great in the main role.

There may be people out there who will spot a lot of references to classic comic storylines that I miss, because I don’t read a lot of comics, and those fans should add a point or two to my rating. Script and direction are solid, and there are certainly enough positives to make up for the flaws (even if one of those flaws is a climax that feels quite anti-climactic).

Overall, this is well worth a watch if you’re a fan of superhero movies. And it’s even worth a watch if you like your action a bit more grounded. There are some far-fetched elements, but this is a step removed from any movies featuring caped crusaders battling against a colourful rogues gallery of enemies.