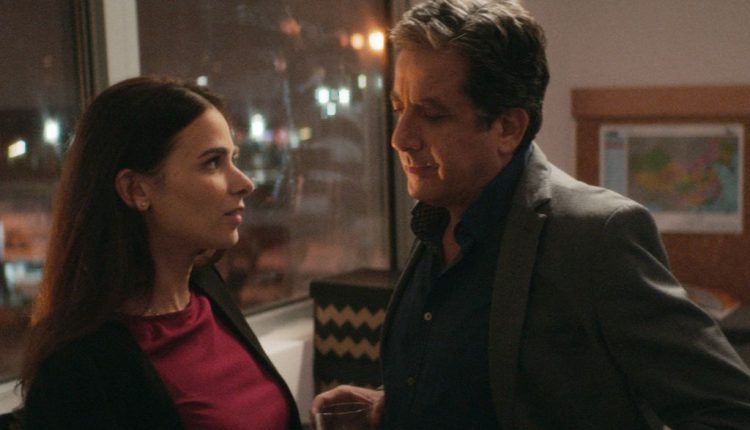 In the current age of the Me Too Movement and the on-going referendum for the respectable acknowledgment of female empowerment within the workplace of countless industries, director/co-writer Michal Aviad’s Israeli sexual harassment drama Working Woman is a clever and evenly paced commentary on a compromised woman’s progression to better herself and sacrifice for the struggling family. Indeed, Working Woman is a timely film that echoes the chaotic contemporary times in which the perverse nature of the corruptible work-related politics/subculture has gone immorally awry.

Aviad and fellow screenwriters Sharon Azulay Eyal and Michal Vinik construct a probing narrative that is methodically stimulating in its observational presentation of a Catch-22 scenario: should a working woman instinctively turn a blind eye to the unwanted advances of her charismatic yet low-key menacing boss in the name of maintaining financial stability for her family’s economic welfare? Aviad and the film’s handlers deliver a smart, perceptively triggered story that puts in the forefront the very thought of a wife’s/mother’s monetary desperation and duty for the sake of ensuring that the family unit’s finances are secured. Working Woman is a prime example as to why so many women are silent to express the hidden outrage that persists because everything feels on the line in terms of the potential backlash financially or emotionally. Thoroughly affecting and insightful, Working Woman gives a defined voice to the unctuous nuances of the quieted hostility embedded within the unassuming work environment.

Orna Haviv (Liron Ben Shlush) is in a financial bind as she needs to come to the rescue and add some much-needed income into her household. Her husband Ofer (Oshri Cohen) had just opened up a new restaurant a few months ago but the business is not showing much profit. With Ofer’s business venture not showing any financial payoff and the fact that the couple has three small children to feed and raise Orna has no choice but to join the workforce and contribute as much as she can.

Thankfully, Orna receives a break when she lands a job opportunity with her former military mentor Benny (Menashe Noy) as an assistant in his lucrative real estate development company. In no time Orna proves to be a vital asset to Benny’s operation as she steadily thrives while showing the ability to attract clientele for investing in seaside properties in Tel Aviv. Orna is a natural at what she does and Benny soon decides to reward her with a promotion to head up his sales department.

Interestingly, Orna continues to rake in the money and obviously Benny is pleased by her successful work endeavors. However, the job–despite its financial perks–is consuming much of Orna’s attention to the point it is not allowing her much time to spend with Ofer and the kiddies at home. Still, Ofer’s restaurant receipts are fickle and Orna is the current breadwinner so she has no choice but to take on the challenges of her well-paid position.

Benny continually expresses his approval of Orna’s money-making talents for his business as her presentations keep drawing in the eager buyers for his building projects. Proclaiming that he and Orna make for a solid team at work he does the unthinkable–he kisses Orna passionately on the spot in his office. Feeling understandably confused and uncomfortable Orna shockingly exits Benny’s office. She is shaken by Benny’s inappropriate advances and is utterly mortified. What can Orna do? Her treasured job is keeping the family financially afloat. Plus, she actually loves doing what she is employed for resulting in a gifted career. Besides, how can she tell Ofer without jeopardizing her marriage or ruining her working reputation?

Reluctantly, Orna returns to work but not before Benny profusely apologizes for his misguided actions in kissing her despite both of them being married. Orna accepts Benny at his word about acting professional around her but she is very wary of him. As time goes by Benny appears to behave himself around Orna and disarms her with generous gestures. Benny encourages Orna to have lunch at Ofer’s restaurant. He invites Orna and Ofer to his fancy dinner party at his place to meet his wife Sari (Dorit Lev Ari) in honor of her birthday celebration. Benny even is instrumental in pulling strings behind the scenes for Ofer to secure his zoning licensing–something he had told Orna he could not do initially. Whatever the case it is clear that Benny has won over Orna’s trust once again. Her boss Benny has changed and showed some contrition…or has he?

It will take a business trip to France for Orna to see and revisit the reprehensible sexual misconduct that boss Benny claimed would never happen again. Talking about the proverbial wolf in sheep’s clothing. Once again Orna has to retreat into a shell of nervousness and anxiety and somehow protect this ugly episode from being exposed. Can Orna muster up the courage to confide in Ofer about Benny’s disturbing sexual behavior? Will Orna be able to escape the corrosive clutches of Benny and find the peace of mind elsewhere to work without this sinister incident?

Engrossing and impactful in its cautionary tale, Working Woman registers with such resonance as it dutifully delves into the psychological entanglements of sexual deviance at the workplace for the insufferable powerful men that perpetuate the turmoil and the vulnerable women at the mercy of the promiscuous madness. As the conflicted Orna, Shlush is outstanding as the victimized target of her boss’s broken integrity. Shlush conveys a raw uncertainty that is thoughtfully convincing and intriguing. Noy’s Benny is the two-faced sexual reprobate whose casual charm intermingled with unassuming sleaze seems so effortless.