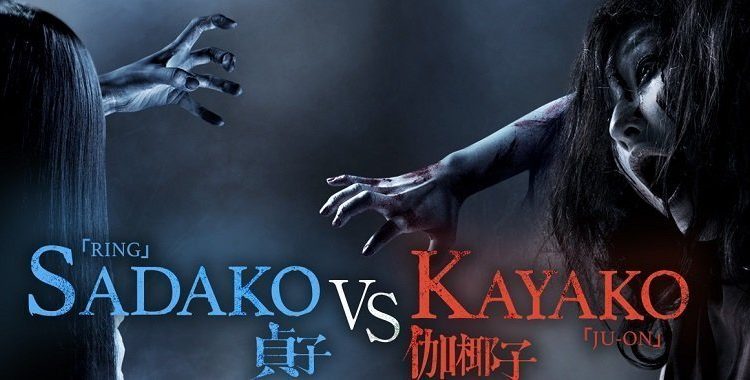 It has been almost 20 years now since most of the world was terrified by Ringu, the horror movie that introduced audiences to a killer spirit named Sadako. Ju-on: The Curse came along in 2000, introducing us to a killer spirit named Kayako, who gained a boost when audiences found the thrills of the 2002 movie, Ju-on: The Grudge. Each of these horror franchises have now stretched into double figures (including sequels, remakes, spin-offs, and sequels to the remakes), both Sadako and Kayako are horror icons, and this has landed us with a crossover film pitting one against the other. But is it something worthy of your time?

The plot concerns, yes, that cursed videotape again. A couple of girls find it, and it ends up being played and watched. A phone rings. Compared to the previous rules, however, the timeline has been altered. Once cursed by Sadako, victims have only two days left. With the clock ticking, and no obvious solution, the girls end up assisted by someone who has something at least resembling a plan. Watch the video in the house that contains Kayako and then let the two spirits fight over the poor soul who will end up caught between them.

Written and directed by Kôji Shiraishi, Sadako Vs Kayako is, in many ways, what you would expect from this type of film. You get a selection of moments that play out a bit like a “greatest hits” selection from both franchises, you get a decent amount of exposition to keep newcomers from becoming completely confused, and things build up to a face off in the grand finale. There are some great moments dotted throughout, individual scares and shocks that mainly stem from the Ju-on material, and the biggest disappointment is that the dread and thrill felt during those moments isn’t felt more consistently throughout the film. It disappears almost entirely when Masanobu Andô (playing the character who might be able to help the girls) comes into the picture, feeling very much like he’s just strolled in from another film – not really his fault, more a failing of a script.

Mizuki Yamamoto and Aimi Satsukawa do well enough as Yuri and Natsumi, respectively. Masahiro Kômoto is very good as a professor with a keen interest in urban legends, Tina Tamashiro is effectively nervy as a schoolgirl who ends up moving next to the house in which Kayako resides, and Elly Nanami, Runa Endo, and Rintaro Shibamoto are all as spooky as they should be.

Like many crossovers of this kind, it’s a step removed from the originals, adding a sense of playfulness that dilutes the atmosphere. Viewers should still be able to have fun with it. It’s just a shame that we couldn’t get something approaching the sheer creepiness of the originals.