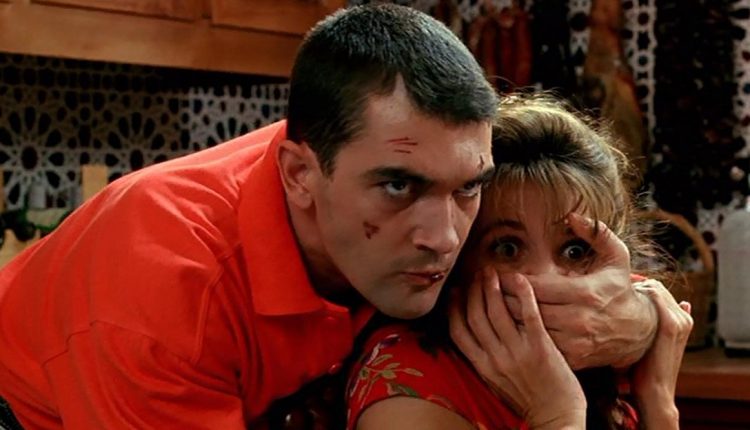 World Cinema Wednesday: Tie Me Up! Tie Me Down!

There are times when I consider that I’m a fan of Pedro Almodóvar, and then times that I remember that I haven’t really seen many of his movies. In fact, despite owning a few for some time, I have only actually watched the one. Bad Education. It was an impressive drama, showing me the director at his best; unflinching, honest, alternately shocking and tactful.

Tie Me Up! Tie Me Down! could be viewed in the same light, I suppose, but it’s a more difficult beast to wrestle with.

Antonio Banderas plays Ricky, a young man recently released from a mental health facility. Not wishing to waste any time, Ricky heads off to surprise and woo Marina (Victoria Abril), a beautiful actress with a history that includes work in the porn industry and a history of drug addiction. Marina is certainly a beautiful woman, and it’s no surprise that someone would want to woo her. What IS surprising is the method used. Ricky forces his way into Marina’s home, headbutts her when she tries to fight him, and gets her gagged and restrained on her bed, convinced that she will fall in love with him during their time together.

There are a few things I need to clarify here. First of all, I am not really offended by much (if anything). Second, I think movies can be made about anything. No subject is taboo and no idea too beyond the pale. Third, I feel the same way about comedy. Anything can be used in comedy, it’s all about the context and delivery.

No, there’s no “but…” appearing here. The only reason I clarified the above points was to allow me to then say that Tie Me Up! Tie Me Down! just didn’t really work for me. I didn’t find it interesting enough, I didn’t find it good enough in the black comedy department, and I didn’t feel that anything was truly earned.

Almodóvar directs well enough, staying true to the course that he has plotted for the characters, and there are fine performances from Abril, Banderas, and also Loles León and Rossy de Palma, to highlight two of the best female supporting players. It even prompts some interesting thoughts on love – can it stem naturally from lust? is it just a confused mental state? can it be forced? Unfortunately, those questions are buried within a film that never really finds the right tone, which leads to no small amount of confusion when the end credits roll and viewers are left to figure out the point of it all.

Not a terrible film, thanks mainly to the cast and a few of the individual scenes that actually work well, but I suspect that Almodóvar is capable of making much better work. And I’ll be checking out more of his filmography when I have the time.