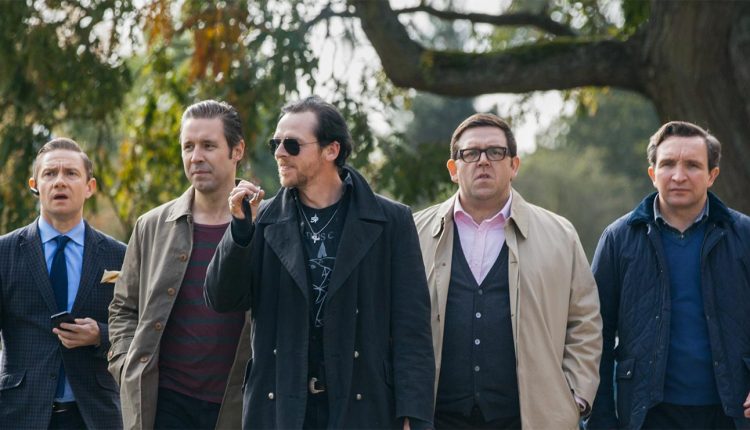 Trying to fulfil an epic pub crawl with the ringleader being a bit of idiot sounds like an normal Saturday night, perhaps destined for disaster.  However, for British film fans, this is a night on the lash everyone has been looking forward to for the past six years – and the final part of director Edgar Wright’s Cornetto Trilogy.

The World’s End follows a group of old school friends – led by the aforementioned young-at-heart idiot Gareth King (Simon Pegg) – who reunite in their home town of Newton Haven to complete the legendary ‘Golden Mile’, a pub crawl of Biblical proportions made up of of twelve pubs.  Unfortunately, instead of the usual threats of dodgy kebabs, argumentative bouncers and the risk of missing the last bus home, there is also just the small issue of aliens getting between them and sixty pints.

While the the careers of Pegg, ever-present wingman Nick Frost and director Edgar Wright may have exploded in Hollywood since the release of Shaun of the Dead‘s in 2004, all three retain their quintessential “Britishness”.  Additionally, there is a nostalgic tone throughout the film that is easily relatable, from the 90’s Britpop soundtrack to having the plot revolving around nothing more than a group of friends on a night out in a quiet English town. There are also noteworthy nods to alien invasion films a-plenty, showing that co-writers Pegg and Wright ensure that The World’s End stays true to the homages that Shaun of the Dead and Hot Fuzz did before it.

Pegg and Frost’s former schoolmates Martin Freeman, Paddy Considine and Eddie Marsen – themselves no strangers to Wright – fill out the rest of the group and do so with such ease, it is easy to imagine all of them as BFFs – and given how well they’ve worked together before, that may not be such a difficult act to pull off.  As the main star, Pegg naturally demands the attention of the viewer as the determined Gareth, but still manages to step out of the limelight long enough to allow the mild-mannered teetotaler Andrew (Frost) to take centre stage.  Along with the evident rapport with Pegg, which is just as fresh from the first days of Spaced, he helps shape the film into the type of buddy film we have grown to expect from this dynamic duo.

As good as The World’s End may be, it isn’t perfect. The plot starts off a bit too stale for a little too long and a lengthy introduction to the characters, delays their settling off on the ‘quest’ and zaps energy from the start of the film.  Thankfully, this does have a purpose as the comedic wit established in the first act serves to reintroduce the characters in time for when the action kicks in.  And when it does, it is glorious.  Amidst incredibly coordinated bar brawls and fast-paced chases, there is a hum of energy throughout the film that makes you enthralled to the bitter end – or in this case, the lager end.

The concluding part of the Cornetto Trilogy is like finding extra chocolate sauce at the bottom of a sundae you’ve been wanting to finish for six years.  Sharp, smart and funny, Wright has played this to a tee.

The World’s End is out in UK cinemas on Friday 19th July.