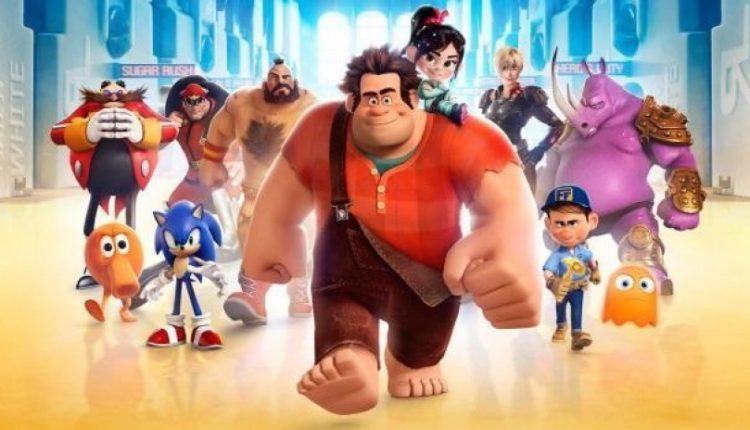 Ralph (voiced by John C. Reilly) is a videogame villain who dreams of doing something more with his life. He doesn’t really like being the bad guy and feels that his work is never appreciated. He certainly never gets a medal. So one day he decides to head away from his own arcade machine and explore some others. He’s determined to show that he can do more than just wreck stuff and be the bad guy. Unfortunately, that leads to a lot of disruption and sets off a chain of events that could allow some bad elements to invade a number of other machines. Oblivious to this, Ralph explores the land of Sugar Rush (a confectionary-themed kart racing game) and befriends a glitch-ridden character named Vanellope (voiced by Sarah Silverman). He thinks that he might do some good if he helps her win the race that she so longs to take part in. King Candy (voiced by Alan Tudyk) tries to make him see sense when he explains just what might happen if Vanellope enters the race, wins and then becomes a playable character, glitching and all. Paying players will be upset, the game will be put out of order and all of the other characters will be rendered useless. Will Ralph be able to do the right thing or will his selfishness lead to a lot of other people seeing the words “GAME OVER”?

For a film that has been gestating in some form or another for the past few decades, Wreck-It Ralph feels like a remarkably fresh piece of animated entertainment. The script by Phil Johnston and Jennifer Lee may not have the sharpest dialogue, but the details and little gags make up for the slight failings in the basic storyline. Director Rich Moore does a good job of balancing the kid-friendly moments with the plentiful references that will guarantee videogame fans will leave this movie with a smile on their face (definitely stay for the end credits to enjoy one last gamer gag). None of the elements outweigh the others and I must say that if even an ex-gamer (and not a good one, at that) like myself could spot many great gags then the more dedicated button-bashers will find even more to enjoy.

It may be a film that sets out to look and feel like a number of popular game titles, but that doesn’t mean that there’s a shortage of talent in the voice department. John C. Reilly is great as Ralph and Sarah Silverman’s mix of mischief and naivete really works well for Vanellope, but there are also great turns from Jane Lynch as Calhoun, a tough leader from a First Person Shooter game, Jack McBrayer as Felix, the man always fixing the damage that Ralph causes and always getting the limelight, and the ever-dependable Alan Tudyk as King Candy.

Simple yet also surprisingly clever, Wreck-It Ralph might be aimed at kids (and the small joke about the word duty sounding like doody will remind you, even while making you smirk at the childish humour), but works, like the best animated movies, on a couple of different levels. Great characters combine with great ideas to produce one of the best animated films of the year so far (yes, I’m aware that it’s only February).

Star Wars to have stand-alone series?