The 12th Flatpack Film Festival opened up this past weekend with Flatpack ’68: a retrospective programme on a internationally turbulent and culturally significant year. Amongst the French May Protests of workers and students, the beginning of The Troubles in Northern Ireland and widespread opposition to the Vietnam War, Lindsay Anderson’s If…. elbowed its way to the front of the picket line.

An allegory for class divisions and the plight of the proletariat, If…. takes place in an English private school where students are segregated by privilege, with Whips and teachers tyrannically ruling over the ‘scum’. Cold showers, toilet dunkings and beatings are the order of the day and the ‘Crusaders’, led by Mick (Malcolm McDowell) begin gravitating towards a violent rebellion.

Whilst originally accompanied with calls to be banned due to the violence, nudity and controversial social commentary, it’s the film’s uncomfortable flirting with the hierarchical sexual abuse of the wards that most disturbs. As the prefects negotiate for the prettiest new boy and swap servants accordingly, it’s seat-squirmingly horrendous. To paraphrase, at least nothing like that could happen now…not today. 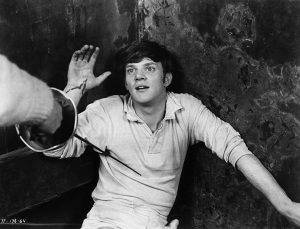 Visually, the flips from black and white to colour and back again are disorienting at first, but soon seem subliminal. A result of the necessity of shooting with natural lighting in the chapel, several other scenes were also shot in monochrome to accompany them (a tale regaled by cameraman Chris Menges at the Q&A following the screening). These scenes also contribute to the feelings of mixed reality and fantasy, where beautiful women appear from out of thin air and clergymen recuperate in huge cabinet drawers.

That this is Malcolm McDowell‘s feature film debut is astonishing. The flared-nostriled fury, mile-wide rebellious streak and endearing intelligence on display here won him his role in A Clockwork Orange. It’s easy to see why. His performance encouraged this writer to seek out more of his work, beyond the usual calling cards.

Finally, If….’s school shootings were sickening in ’68, but carry a regrettable weight now that we live in an age of Virginia Tech, Sandy Hook and far too many others to mention. If…. is an intriguingly prophetic product of its time: intentionally humorous in it’s pomp and ceremony cynicism, and shockingly scary in it’s forecast of violent rebellion. It’s less a case of ‘If…. and more a case of ‘When…’. Sadly, it’s now.