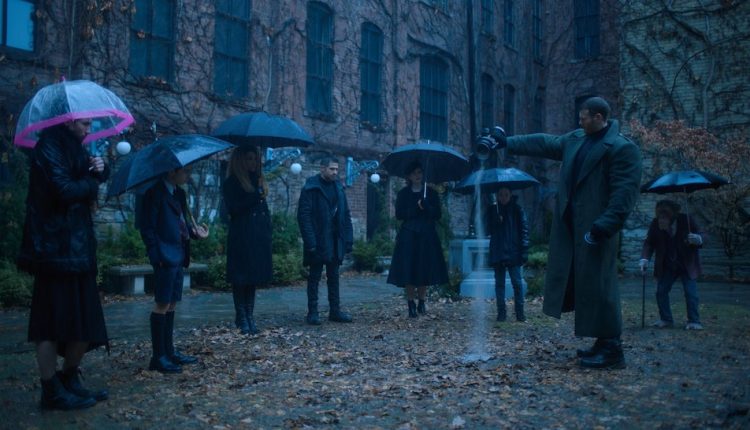 Flickfeast & Chill: The Umbrella Academy, Episode 1 – ‘We Only See Each Other at Weddings and Funerals’

With a quirky opening that rivals The Royal Tenenbaums, the protagonists’ mysterious start in life and the resolute Academy director Sir Reginald Hargreeves (Colm Feore) quickly set them up as the world’s newest superheroes. But after 12 years and the death of student Ben, they are living their own albeit troubled lives away from the Academy.

‘ sudden death brings the former students together but it is not long until they start sniping at each other. Knife-wielding Diego (David Castañeda) is confrontational, bitchy addict Klaus (Robert Sheehan) is dismissive and Allison (Emmy Raver-Lampman) is too busy trying to resolve her own personal issues. All the while, super-strong Luther (Tom Hopper) struggles to keep the peace and outsider Vanya (the understated Ellen Page) feels ignored.

Needless to say, they aren’t exactly The Brady Bunch. Even their endearments towards each other and their late ‘Father’ are laced with resentment and bitterness. This underlying tension feeds intrigue into what is already a dysfunctional household, which only worsens due to the presence of Vanya.

However, their pettiness is soon interrupted by Five (Aidan Gallagher) who unexpectedly returns to the future. Having matured during his time away, he has become an impatient thirtysomething stuck in a teenager’s body with a penchant for coffee.

However, he quickly establishes himself as a force to be reckoned with and brings the audience to the crux of the series – they have eight days to avert the apocalypse and save the world.

Written by Death Note screenwriter Jeremy Slater, the barb-filled dialogue doesn’t match the fantasticality of the premise. Coupled with the unimaginative character tropes, we are left to wonder if there is more to The Umbrella Academy besides its family drama.