There’s a certain scepticism that seems to accompany the announcement of deceased celebrity documentaries these days. Perhaps it’s the way the market has been saturated with tenuously-linked talking heads and paparazzi pics of said celebrity spewing into a storm drain. I’m looking at you, Channel 5!

It was a relief then, to discover that I am Heath Ledger eschews all sensationalism and shock tactics, instead, shedding genuine insight into his life, his passions and his work.

And boy, did he work! The most compelling component of this documentary is that Ledger was in a constant state of creativity: his hands permanently occupied with cameras, guitars, or notebooks. Scenes such as his camcorder spinning selfies, mirror monologues and home movies add a remarkable texture for anyone who regarded his heart-throb good looks as an obstacle to his artistry. Yours truly included. 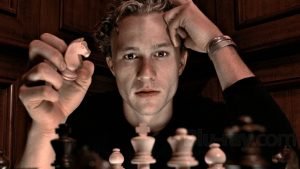 Tellingly, there’s no shortage of those willing to document the extent to which Ledger touched their lives: from musician and best pal Ben Harper to Brokeback Mountain director Ang Lee and fellow antipodean actor Naomi Watts. Here, there are heart-swelling recollections of how Ledger would command a room, had an open-door house-party policy and still get a role even when he struggled to enunciate in his audition (See: The Patriot). It was almost difficult to watch without having the nagging notion that he was simply better than you. And he did it all before he hit 29. Thanks, then.

Mirroring the man himself, this doc’s strengths also contribute to it’s (minor) downfall: Heath’s home videos are insightful but heavily overused and quickly tire any viewer who isn’t a full-on fanatic. And contrary to the introduction, there does seem to be a deliberate (and perhaps deceitful) shying away from his crippling self-doubt and drug dependency. Heavily reliant on sleeping pills to combat his insatiable lust to create, the documentary arguably warrants a medical perspective to press the tragedy of his accidental overdose, as opposed to his assumed ‘accidental overdose’. Still, if it’s that you’re after, see Channel 5.

As a celebration of Heath Ledger’s life, rather than a inquest into his death, this documentary is enjoyable and enlightening, if not ever-so-slightly exhausting.