by Tom Baker
in Reviews

We’ve had films which chronicle the rise and fall of pop stars, of pop stars struggling with substance addiction, of pop stars trying to stage a comeback, about pop stars falling in and out of love, about pop stars saving the world. Vox Lux is the first film about pop stars and terrorism that I can think of. A bloke on my row asked his mate what kind of film this was. “Erm, it’s in the A Star Is Born genre?” The friend replied. Despite his smugness at having gotten to repeat a Twitter bon mot IRL, he’s not wrong.

Brady Corbet’s second film as director has some similarities with the Lady Gaga/Bradley Cooper Oscar contender. It is a well-crafted, acted and conceived story about the music industry. It has some great original songs, here written by actual chart topper Sia. The scope here is larger, however, and more sweeping. Vox Lux‘s bifurcated structure opens with an adolescent Celeste (Rafey Cassidy) taking her first, tentative steps into the music industry with her sister and collaborator Ellie (Stacy Martin).

The second half of the film skips ahead to the present day, with Natalie Portman playing Celeste six albums, a serious substance abuse problem, several lawsuits and one teenage child into her career. Where Cassidy’s Celeste is quietly driven, confident beyond her years, her poise preternatural to the point of eeriness, Portman’s adult Celeste is a mess.  With a studied Staten Island accent, manic energy and monologues that spider off into every direction, there’s more than a little of Gena Rowlands beneath Portman’s brilliantly brave, egomaniacal performance.

Elsewhere there are credible turns from Jude Law, as the enjoyably slimy svengali who shepherds her to pop stardom and whose no-bullshit approach to the industry provides some comedic levity; Jennifer Ehle as Celeste’s publicist; Christopher Abbott and Daniel London in a pair of perfect one-scene character roles; and Cassidy’s second role as Celeste’s daughter, Albertine, sullen and withdrawn as the young Celeste was focused and determined.

Here’s the other unexpected A Star Is Born connection: how trauma informs, feeds and can ultimately derail a popular performer. While Cooper’s film framed that in the familiar context of a musician escaping an abusive childhood through drugs and booze, Corbet aims for something thornier and more slippery. 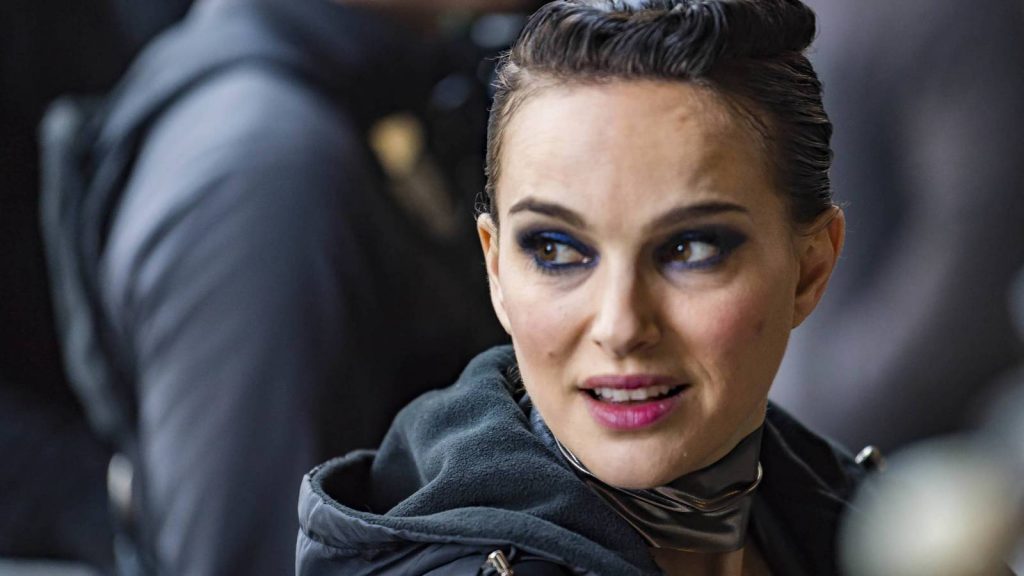 There are incidents, plot developments, nods off-screen to events as various as the Rolling Stones disaster at Altamont (as captured in the chilling documentary Gimme Shelter), the censure of radio playlists in the wake of 9/11, the blame placed on musicians like Marilyn Manson for the Columbine shootings, and more recent direct attacks on concert-goers such as 2015’s Paris Bataclan massacre and the 2017 bombing of an Ariana Grande concert in Manchester.

If that all sounds a bit heady and solemn for a film about pop music, well, you’re half-right. Vox Lux is almost oppressively dour to begin with. As with his debut feature The Childhood of a Leader, Corbet and cinematographer Lol Crawley draw on the austere colour palette, limited lighting and self-seriousness of the iconoclastic arthouse and European directors he’s worked with as an actor: Michael Haneke, Antonio Campos, Lars von Trier.

Scott Walker provides another nerve-shredding, portentous score. In Childhood of a Leader, the oppressive atmosphere and doom-laden music made sense; it was, after all, a film set at the end of World War I about the formative years of a fascist. In Vox Lux that tone is initially jarring, what with its dark rooms and Willem Defoe‘s intermittent, deadpan narration placing Celeste’s career in the proper socioeconomic context.

That is until it warms to its theme, at which point Vox Lux succeeds where The Childhood of a Leader ultimately failed. Corbet is clearly a filmmaker with bags of ambition, with a huge amount of talent and an original point of view. For his second feature, he actually manages to connect all these disparate threads and aesthetic choices in a meaningful way.

In a rare moment of both optimism and sincerity from a character otherwise always “performing,” Celeste explains she was drawn to pop music because it helps people forget about the world, and just be purely, uncomplicatedly happy. But what happens when the outside world intrudes on that? And who will eat the sin-eater’s sins?