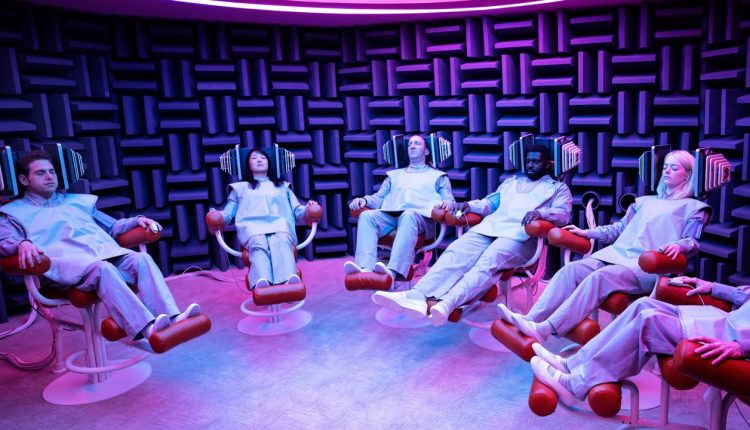 Netflix has almost 118 million subscribers as of this year. In 2018 alone it released original films and TV series numbering in the hundreds. Last year they surveyed users and found we collectively watch 140 million hours of content per day. That’s a lot of data to draw upon. Their latest creation, Maniac, appears to draw directly on that vast collection of viewing habits.

A dark comedy based on the Norwegian series of the same name, the new show by The Leftovers screenwriter Patrick Somerville and newly-minted Bond director Cary Joji Fukunaga employs some vivid hallucinatory imagery and special effects to portray an experimental medical trial undertaken by a group of traumatised participants suffering a varied spectrum of psychological complaints.

Its imagery that isn’t wholly unfamiliar, however. But we’ll get to that. Central to that group of maladroits are Jonah Hill’s Owen, the schizophrenic son of a wealthy Upper West Side family, and Emma Stone’s Annie, whose violent temper is barely constrained (and intimately linked) to her abuse of prescription pharmaceuticals. Immediately the age-old psychological debate over nature vs nurture is floated, as the near-future New York the characters inhabit is dystopian to the point that anybody would be depressed.

Taking part in medical trials is one of the few viable forms of income going. Other makes a living as “Ad Buddies,” an absurdist extrapolation on the present day practice of online services like Spotify and YouTube, where “free” access to content is paid for by unskippable ads. These individuals are hired to reel off advertising copy to people who can’t afford to spend actual currency on food and cigarettes. How could you resist the urge to retreat into fantasy, your subconscious, or addiction? 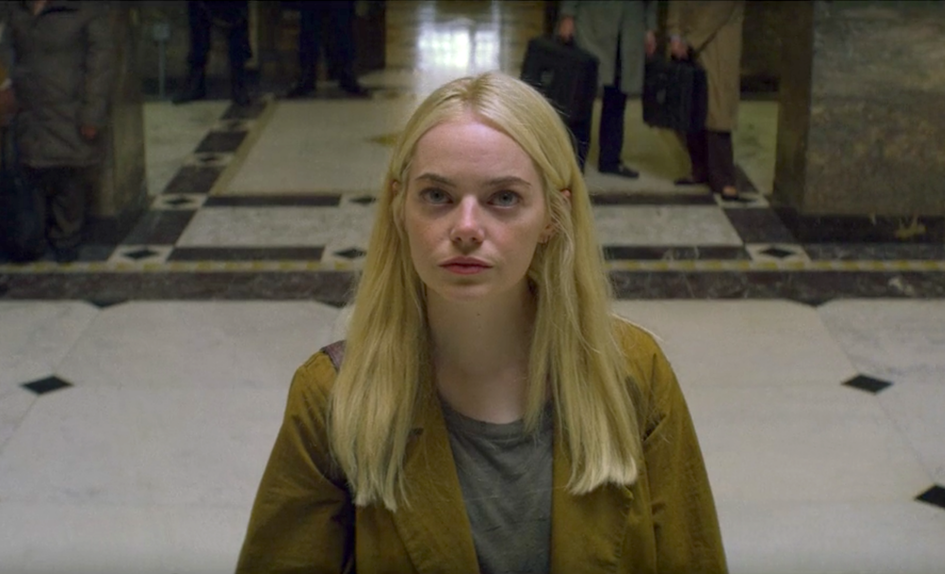 While Hill is the cast member with most prior experience in pure comedy — although Justin Theroux, who shines here as the alternately brilliant and pathetic creator of the pioneering therapy the trial subjects are put through, has certainly had his moments — his character gets the least laughs. His performance as the disconnected, disaffected Owen is deliberately flat, with the gags coming at his expense. It may be intentional, but it’s not particularly interesting.

In fact, the show’s sense of humour can be characterised by an early line delivered by Owen’s office manager, who cracks a gag using his “sort of humour, where you say something you don’t mean, and nobody laughs.” It’s all awfully ironic, arch and occasionally cruel. There’s the absurdity of the pixellated computer screen telling the participants an “ODD EXPERIMENT” is about to begin; there’s the cringe comedy of experiment co-lead Dr Fujita (Sonoya Mizuno) walking in on Theroux’s Dr Mantleray indulging in some VR-aided onanism; there’s the gallows humour of the Owen’s intermittent hallucination of a man (Billy Magnussen), identical to his brother, who tasks him with saving the world.

The retro-futuristic world of Maniac pays homage to the science fiction of the seventies in its set and production design. There’s lots of chunky CRT monitors displaying green text read outs, and the highly advanced supercomputer running the experiment is a bank of blinking lights and whirring tape decks straight out of the original Alien. The cinematic era it more directly recalls, though, is of a couple decades later. 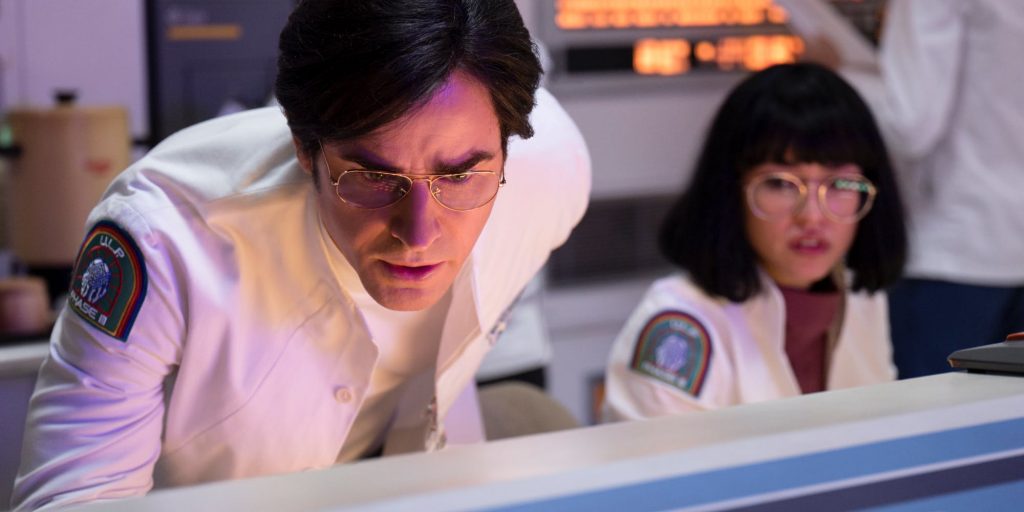 It’s a show about the difficulty of attaining meaningful, lasting connections and relationships, and the attendant loneliness when that search fails. That sincere quest is muddled, however, by the sort of nonlinear narratives, postmodern winks at the audience, ironic humour and knowing homage to other media that deal with similar topics. In that approach, as well as many of its visual motifs and structure, it resembles the films of the late nineties/early noughties directed by Spike Jonze, Darren Aronofsky, and Richard Linklater.

Porous realities and luckless losers abound in Being John Malkovich, Pi and A Scanner Darkly, films whose dreamy affect in opposition to a dreary, normcore reality is evident in Maniac‘s similar divide between the dystopian, seventies-tinged world inhabited by the characters and the vivid imagined sequences that take place within their heads. Stone’s abrasive, aggressive manner, which continually puts her presumed love interest on the back foot, is even a recognisable type from the screenplays of Charlie Kaufman, from Catherine Keener’s role in Malkovich and Kate Winslet’s in Eternal Sunshine of the Spotless Mind.

It’s the latter film that the show most resembles as it heads into its second act, as Stone and Hill’s characters keep “finding” each other in a series of shared dream sequences. In one where they’re a hairspray-encased couple in eighties suburbia, in another they’re high-fantasy Elvin warriors. This development is narratively and thematically indistinct from Jim Carrey’s Joel trying to hide Winslet’s Clementine in safe parts of his brain, as he has his memories of her erased following their break-up.

The sheer amount of visual ingenuity, gags and style is almost enough to carry Maniac through its ten episodes of varying length. Almost. But it doesn’t have much of consequence to explore once the character’s “core traumas” have been relived, and throughout that prolonged runtime it doesn’t cover any ground those two hour-long features already staked out.

Hurt people hurt people, trauma is something to be accepted and made sense of rather than erased or somehow obliterated, Justin Theroux is probably a pervert. We already know all this. Between its awfully familiar themes and equally interchangeable production design, it’s perhaps unsurprising to learn Maniac was developed in part by mining Netflix’s data to find out what its target audience want to see in a limited series. How’s that for a dystopian reality?