Once Were Warriors crept into the subconscious over 20 years ago, garnering a word-of-mouth reputation as a raw and realistic depicting of a repugnant protagonist. In sharp contrast to the slick, highly-stylised and showy thrillers of the day, Once Were Warriors was a sucker punch that caught you completely unawares.

Director Lee Tamahori’s (Mullholland Falls, Die Another Day) debut feature is an unflinching account of domestic violence and conflicting cultural identity amongst Auckland’s urban Maori community. These are indigenous people who are struggling to cope with how modernity impacts on their heritage. With some descended from slaves, others from royalty, the acceptance of Maori heritage is either a curse or a blessing. The embodiment of this struggle is married couple Jake (Temuera Morrison) and Beth (Rena Owen) respectively.

Throw into this mix habitual heavy drinking, women’s roles as wives or whores and an impressionable younger generation who can only sit and watch, and you’ve got a dire state of affairs that’s halfway along a downward spiral.

The film opens with a ‘Tarantino-by-numbers’ introduction to the principal cast through an adrenalized blend of freeze-frames, roided-up soundtrack and screen-crashing credits. This soon comes across as false advertising; a jarring attempt to grab the viewer’s attention. All unnecessary, it has to be said, as the film is held together by the strength of the leads form the outset.

Morrison (Star Wars: Attack of the Clones, Moana) as Jake the Muss is unforgettable and (sometimes unfortunately) many viewer’s ‘in.’ He’s equal parts pure charm and sheer rage. His outbursts of violence define him, whether it’s directed at bar flies, his wife or his children. Trouble is, his demeanour after each event is enough to make you still want to root for him. Sort of. Almost. Maybe.

Rena Owen’s (Star Wars: Attack of the Clones, AI: Artificial Intelligence) Beth has to tread that line on the viewers’ behalf. The acceptance of her situation is heart-shattering but justified by a wife and mother’s sense of responsibility. Or what her friend describes as “Keep your mouth shut and your legs open.” This duty and devotion is never more on show than when she’s counselling her son through the bathroom door, holding her voice steady, whilst her face is distorted and swollen (in an impressive feat of make-up magic) as a result of answering back. 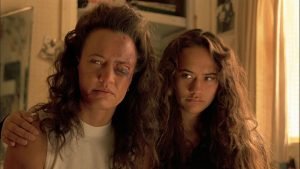 Unfortunately, the younger cast do not fare as well. Was the sincerity of their performance dampened because of the intonation of the New Zealand accent? Or was it their youth? Either’s a contentious point, but for the former, think Taika Waiti’s turn in Thor: Ragnarok. Regardless, it took this viewer out of the moment and undermined the work of Morrison and Owen.

Directorially, the flare ends with that flashy introductory scene. Tamahori effectively keeps the focus on his characters and their plight from there on out. This is never more so than when he tests the viewers’ mettle: an excruciatingly long foreplay scene, an up close and personal beating or witnessing the sexual abuse of a minor. Told you it was unflinching.

…somebody needs to get out of the way. Fast.

Sonically, the film is filled with feel-good drunken singalongs that teeter on the brink of erupting into aggression which neighbours complained about IRL. These are meticulously and metaphorically contrasted with controlled, channelled hakas. Most striking though, is the noise that accompanies Jake’s surging rage. Handled by a lesser filmmaker, the revving engine-esque effect might come off as comical, but here it delivers a sense of foreboding that somebody needs to get out of the way. Fast.

What was initially worrying was whether Once Were Warriors would had aged unfavourably, but with its themes of racial identity, gender inequality and an often abusive patriarchy, how can it? That 20 years has only seen these issues escalate – be it in New Zealand or elsewhere – only serves to make Once Were Warriors all the more relevant, deserving of its re-release and well worthy of your time.

Once Were Warriors is released on Blu-ray on the 19th of February. Special Features include a “Where are they now” documentary and an interview with Lee Tamahori.