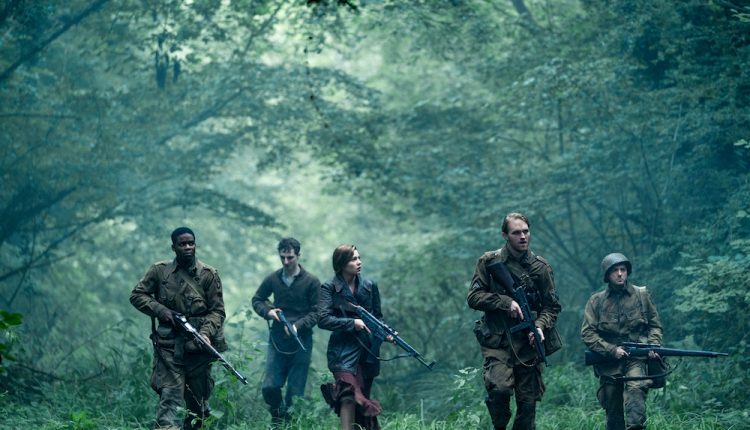 It was rumoured to be an instalment in the Cloverfield universe, but then it was confirmed it was not. The Bad Robot and J. J. Abrams-produced Overlord certainly benefits from being a standalone film that has no ties to an already established franchise. The film can do whatever it wants and for the most part, Overlord is a riveting and exciting mix of horror and action.

For all its faults, Overlord is a blast overall and it’s exciting to see studios willing to theatrically release a film that is not an easy sell. It’s not totally a horror film, it’s not completely action and it’s set during World War 2. It’s also got a bit of a comedy side. How often does a film like that come around?

Overlord begins on a high, featuring one of the most intense and impressive opening sequences in recent memory as the soldiers prepare to drop behind enemy lines. It’s a scene that is as nail-biting and explosive as they come, and if you choose to see Overlord in IMAX, this scene alone is worth your pennies. It’s loud. dramatic and aside from a few witty lines from the guy we know is going to be the comedian of the group, it sets the tone as being a deadly serious one. As the marketing so brazenly teased, we’re psyching ourselves up for a twisted tale of war and mad science, and it’s so far so good.

There is a very strong first half here and it’s easy to get swept up in Overlord‘s overt mystery. What’s going on in the basement of the church? What’s wrong with Chloe’s aunt? She’s locked away in a room like the possessed Regan, because she’s “sick”, but we know there’s something more sinister going on when we see a group on Nazis set fire to people who won’t die. Things get icky and gross when Boyce (Jovan Adepo) shows up with a syringe filled with glowing red liquid; as you’d expect it’s not long before the liquid is injected. The madness that ensues showcases the film’s excellent practical effects that will leave those with the weakest stomachs with the hands over their eyes and ears. Bones will crack and blood will flow as Overlord‘s horrifying secrets are displayed for all to see.

It is a lot of fun when everything turns to hell and the soldiers find themselves caught in the middle of a science experiment gone horribly wrong – or right, depending on how you want to look at it. The people are “given a purpose”, but it’s an immoral one and it’s easy to spot Overlord‘s reminder that playing god is never a good thing. A clash between science and religion is front and centre, and it’s no accident that the madness takes place in the confines of a place of worship. Overlord‘s story unravels like that of Frankenstein, where it’s immediately obvious who the real monsters are. You’ll almost be able to hear the screams of “It’s alive!”.

Overlord is let down by its eventual descent into schlocky silliness. What began as a serious story about the horrors of war, the pressures of battle and questions of identity, what makes us human and who we decide to be in the face of terror, becomes almost comic book-style ridiculous. We’re left with a villain who looks like he’s stepped out of DC’s universe and cliched lines like, “Can someone tell me what the f- is going on here?” start to feel irritating. The onslaught of comedy, particularly by John Magaro‘s Tibbett, adds to the annoyance and as the film drew to a close, I was glad to see it finally ending.

Overlord should be applauded for its commitment to insanity, but it’s a shame that it couldn’t quite land the jump it so courageously took. Sticking to its guns and being the skin-crawling, zombie-horror that it promised would have earned it a higher rating from me, but, I’m certain that many will love Overlord’s mish-mash of identities and I can’t deny that it’s wicked fun.

Overlord is in cinemas now.