Paddington Bear. Never been a fan.

If we were talking podgy, precocious bears with a penchant for sweet sandwich fillings then we had to be talking Pooh. It was like a Beatles vs Elvis thing: you can be Paddington Bear people and you can be Pooh Bear people but you can’t like them both equally. So it’s with great sadness that Pooh Bear is now officially dead to me.

Following on from the hugely successful Paddington, the imaginatively titled Paddington 2 finds our hero fully assimilated into the idyllic London lifestyle: he croggies on a Boris bike for his morning commute, he feeds a stray dog each and every day and he tests wannabe cabbies on their route tekkers. It’s a shame then, when he gets fingered for stealing an antique pop-up book and ends up doing bird as a result. What we know though, is that it’s the dastardly Phoenix Buchanan (Hugh Grant) who stole the thing as it also doubles up as a treasure map. Cue, capers.

Paddington 2, simply put, is an unadulterated joy. The Brown family are all perfectly performed, with Hugh Bonneville’s Henry suitably less haughty than in the previous film. Sally Hawkins is now officially our Woman Crush Wednesday (and Thursday, Friday…) and even the teenagers don’t grate like they did in the first. Jim broadbent resurrects his Blackadder Prince Albert routine as antique shop owner Mr Gruber and even Mr Curry (Peter Capaldi) is welcomed back to stick his nose into everyone’s business again.

The new additions to the cast also freshen up Windsor Gardens nicely: Jessica Hynes and Ben Miller as a pair of lonely hearts received an “awwww” in our house and Brendan Gleeson is great as Knuckles: chef, jailbird and Paddington’s prison bitch. Add to that Tom Conti’s curmudgeonly judge getting a cracking Lionel Blair cut at the hands of the P-Bear and you know you’re onto a winner. 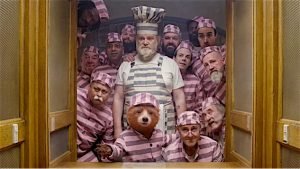 Stealing the freshly-chewed scenery though is Hugh Grant as Buchanan. Clearly having as much fun as you are watching him, just where has this guy been? The only thing he’s missing is a moustache to twirl. It’s Paddington 2‘s presentation of its characters that is its biggest success: alongside Buchanan, they all have clear motivations and develop throughout the film. Infact, it’s so caringly crafted that you wonder why you don’t see such attention to detail more often elsewhere. By the time a throwaway yoga gag returns at the film’s climax, you know other filmmakers seriously need to up their game.

When one of the only criticisms about the movie that you can muster is that there isn’t enough bear growling in it, you know you’re going soft in your old age. So warm is its heart that it almost allows you to look past all the operational red phone boxes and rubbish bins in train stations. Almost.