Serving as a pilot for a full length feature, Retribution follows ‘The Hobo’ (Daniel Stisen) as he takes down a gang of nefariously named ne’er do wells, on the hunt for an ever-elusive code. As The Hobo ascends the gang’s hierarchy, we learn that in-fact, he’s bought the code to them. 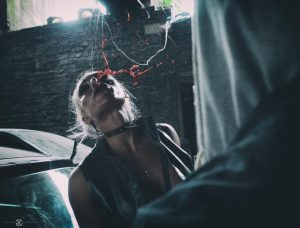 Director of Photography Yiannis Manolopoulos makes the whole short look like something between the bathroom in Saw and the toilet from Trainspotting. This place is purposely painted as the wrong side of the tracks where it’s so grimey that Skepta’s likely looking for a royalty cheque.

Director Nick Wall knows when to pull away from the violence – anyone afraid of Misery‘s ‘hobbling’ scene should steer well clear – but this does result in a feeling of a few pulled punches too. Understated by comparison though is the sparse piano score which evokes Max Richter’s work on The Leftovers, adding a haunted poignancy to the quieter moments.

Already claiming victory at the Oniros Film Awards for the Best Fight Choreography, Best Action Film and the TMFF Audience Choice Award, the continuation of the series looks certain. A full-length feature would no doubt leave room for the character development that these creations deserve. Fingers crossed, we get it.

Retribution is out now and can be seen at Daniel Stisen Productions on Youtube.

by Jasmine Valentine
No Result
View All Result