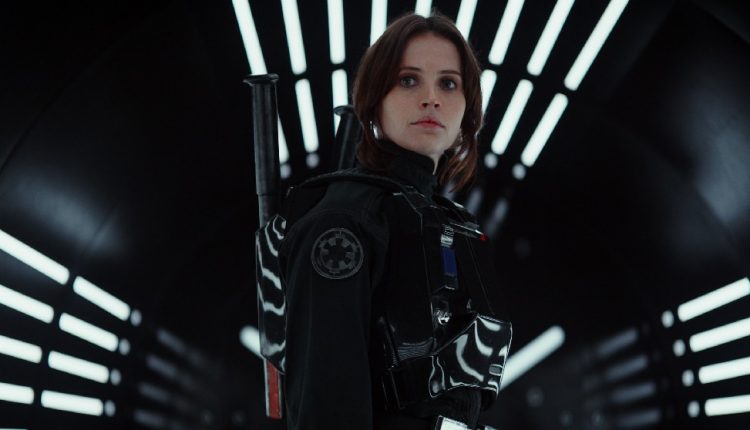 Forget about rebooting the franchise, creating a Star Wars standalone movie is the saga’s riskiest move yet. Like The Force Awakens, this prequel/spin-off has to activate devotees’ nostalgia receptors while also delivering a fresh experience. But it also has to do all that without the aid of lightsabers, Skywalkers or any of the space opera’s other iconic trademarks. That Gareth Edwards’ Rogue One pulls off this mean feat is nothing short of extraordinary, delivering an epic heist movie that will satisfy diehard fans and newbies alike.

Inspired by a vague line from A New Hope’s opening crawl, Rogue One returns to a galaxy far, far away at a time when Luke Skywalker was still pratting about on his uncle’s farm, as a rag bag bunch of rebels prepare for a daring mission to steal the plans to the Death Star.  They’re lead by Felicity Jones’ fiery Jyn Erso, whose father (played by Hannibal’s Mads Mikklesen) designed the giant space laser in the first place. Another courageous orphan left abandoned on a planet, Jyn is closer to Rey than Luke given she has no interest in joining the rebellion until she sees an opportunity to reunite her family. After being liberated from a Imperial labour camp – with the help of Alan Tudyk’s comedy droid, reprogrammed to act like a cranky C-3PO – Jyn receives word that her father lives and has built in a secret flaw into Empire’s super weapon that will lead to its destruction.

It might be free from the dark side/light side duelling of the main saga, but if anything Rogue One is darker and edgier than its predecessors, with a story far more complex than an uplifting tale of good triumphing over evil. Edwards’ retains that scrappy, lived-in feel we all know and love but also brings the grim aesthetic of a war movie to the Star Wars universe. This is an uncompromising trip to the front lines of the rebellion, a place where saturated planets have been ravaged by war and where anyone can die at any time. That includes any one of our mis-match band of heroes, a fact which helps to ratchet up the tension in a story where we ostensibly already know the outcome. The rebels will undoubtedly succeed in retrieving the schematics, but will any of them survive to celebrate the victory?

The cast is solid if not quite as emotionally compelling as the Skywalker clan and, unlike other recent ensemble movies such as Suicide Squad or The Magnificent Seven, Edwards’ gives everyone enough screen time to put their own stamp on proceedings. Jones is suitably tough and battle-hardened as Jyn, but it’s Donnie Yen and Jian Weng who are the most exciting of the new additions. A throwback to Star Wars Eastern roots, the Force-Fu fighting style of Yen’s blind mystic feels like a fresh twist for the series, while Weng offers some cynical comic relief as his grumpy sidekick.

As always, it’s the baddies who get to have the most fun. Ben Mendelsohn is great value as dastardly Director Orson Krennic a corporate suck-up who internally boils with ambition but outwardly kneels at the feet of those above him; yet it’s two returnees who will generate the most post-viewing discussion. We already knew James Earl Jones’ dark lord would be making his wheezing presence felt and Darth Vader certainly doesn’t disappoint in his fleeting but effective appearances, showcasing some of the most devastating use of Force we’ve ever seen from the Sith. There’s also a surprise return for another Empire commander whose recreation via seamless CGI is an unexpected pleasure.

There are times when the plot threatens to overwhelm itself, particularly during a bewildering first act that gets bogged down in complex spy games on far-flung planets; but once it finds its narrative footing Rogue One is an exhilarating adventure culminating in an epic ground skirmish that mixes Return of the Jedi scale with the grit of Saving Private Ryan. It was a brave move to revisit a time so close to the beloved original trilogy, but with some first-rate visuals, inspired twists and plenty of fan-pleasing nudge-wink references, including some genius repurposing of binned footage from A New Hope, Rogue One is a bold first step for future standalone movies.