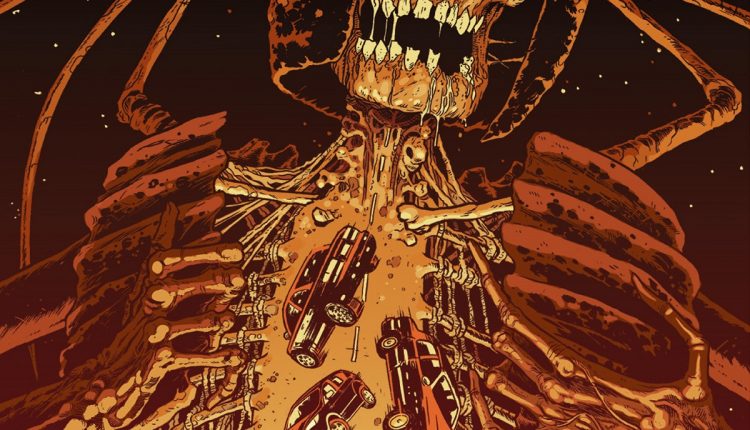 I’m not entirely sure if it’s all to do with the quality of the final product or whether it just looks better in comparison to so many other recent horror movies, but Southbound turned out to be a very pleasant surprise. It’s another anthology movie, and we’ve been getting those thick and fast in recent years, but the nice intersecting and interplay of the different tales is done in such a way as to make it feel a lot less compartmentalised than most.

The title comes from the desert road that most of the main characters end up driving along. It’s one of those typical American never-ending highways that no good horror movie can do without. A tarmac-laden nightmare with far too much distance in between gas stations and small cafes. If you don’t take notice of those “last chance for gas/oil/water” signs then you’ll end up with a lot more to worry about than just those reluctant noises that start emanating from your engine.

Things start impressively enough, thanks to a tale about two blood-covered men who seem unable to drive away from a terrible fate. Then it’s on to a story concerning a trio of girls who find themselves stuck in the middle of nowhere with a flat tire and a tight schedule until their next gig. After some debate, they decide to accept help from a passing couple . . . . . . . which may not be the best idea. Third, we have a man trying to do the right thing after he hits a young woman with his car. Fourth, a man tracks down his sister with nothing more than his dogged determination. Oh, and a gun, he also has a gun. And finally, the fifth tale, we see what happens to a happy family while on a small vacation.

With a number of people working behind the scenes on this who also worked on V/H/S (including the collective known as Radio Silence, responsible for my favourite segment of that movie), and a cast that includes Fabianne Therese, Hannah Marks, Dana Gould, Anessa Ramsey, Mather Zickel, Justin Welborn, and Larry Fessenden (voice only), this isn’t exactly amateur hour. It often shows some interesting restraint, and is perfectly happy to allow some of the more mysterious elements to stay that way, but that doesn’t mean that gorehounds will be disappointed. The nastiness on display here is some top notch stuff indeed, and the third tale has some real stomach-churning moments en route to one of the sickest little punchlines I can think of (from recent movie viewings, anyway).

I’m sure that it’s already had enough praise heaped upon it, and I am just a bit late to the party as usual, but I’ll highly recommend this to any horror fan looking for their latest fix. It has an assortment of memorable characters, some solid FX work throughout, an admirable adherence to self-contained logic, and some fun, if not entirely unpredictable, twists and turns. Seek it out now.

Southbound is released on disc today, here in the UK.