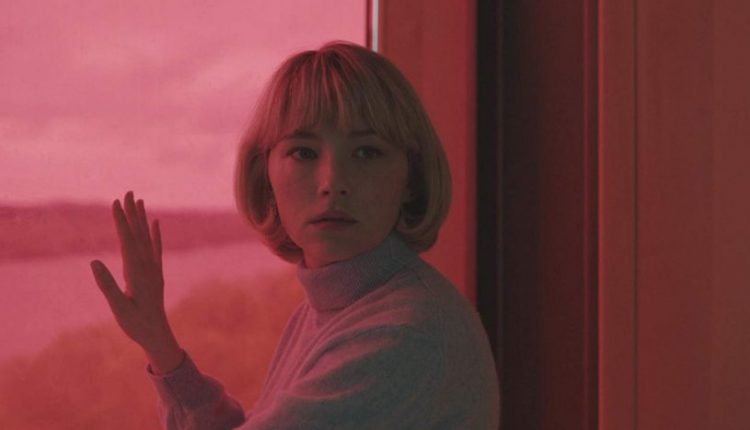 There is no doubt that feminist angst-ridden themes of psychological complexities resonate when striking the truthful foundation of a troubled woman wounded soulfully through her haunting spirit. Writer-director Carlo Mirabella Davis’ debut feature Swallow certainly echoes the intricate tendencies of a feminine lost soul left to her hidden mental devices. Absorbing, contemplative and probing, Swallow is low-key but potent in its dramatic portrait of a slow burn showcase pertaining to a precarious nervous breakdown gone unchecked.

Indeed, Swallow is not quite revolutionary or groundbreaking in its stark examination of a seemingly blessed housewife with idyllic trappings of a comfortable existence at the palm of her cherished hands. Still, the penetrating performance by lead actress Haley Bennett (“The Girl on the Train”) as the inflicted domestic recipient of a devastating disorder that compels her to dangerously swallow ominous items as a coping mechanism elevates the high stakes of psychological incompleteness in this mysterious and stylish melodrama. Bennett epitomizes the harrowing account of a compromised and confused woman shielded by the harsh realities of her turbulent proclivities.

Hunter (Bennett) appears on paper to have the opulent lifestyle that practically every woman would kill to experience. The blonde and desirable Hunter is on top of the world as she enjoys her hunkish husband Richie (Austin Stowell, “Fantasy Island”, “Whiplash”) and their treasured and charming home overlooking the scenic Hudson River. Somehow, Hunter still feels curiously empty inside as her unfulfillment and isolation overtakes her sense of privileged priorities. Despite her wealthy businessman hubby Richie and the glamorous attachments that come with him it is clear that Hunter feels overwhelmed and trapped in this marvelous malaise of snobbery.

Among the questionable factors that weigh on Hunter’s detached frame of mind concerning her upper-crust living arrangement involves dealing with her insufferable in-laws Michael and Katherine (David Rasche and Elizabeth Marvel). Additionally, Hunter’s bout with loneliness is a major concern as she does not have the consistent interaction she needs to develop special bonds of friendship. What adds more pressure to her domestic dilemma is that Hunter now finds out that she is pregnant–another worrisome footnote to ponder within her posh prison of disenchantment.

The desperate manner in which Hunter handles her overall numbness is predicated on the dubious eating disorder known as pica–the practice of digesting inedible animate objects such as marbles, thumbtacks, batteries, coins, etc. Insanely scary and uncontrollable, Hunter proceeds to consume these ominous items to the point of no return. It is an unflinching observation of a thoroughly broken women and her horrifying self-punishing methods to contain a sadistic version of ill-advised self-medication spiraling into mounting madness.

The unsettling mystique to Swallow is not difficult to comprehend because the embedded dissatisfaction and dysfunction of this complicated housewife’s indelible psyche is profoundly disturbing. Bennett’s engrossing take on the scarred Hunter is the convincing nightmare that deems Davis’ damaging drama a piercing profile of quieted alienation. The despair and drudgery of a so-called suburban utopia is relentless and revealing. The verge of psychological warfare within Bennett’s Hunter is an agonizing one-woman turn that manages to feel authentically compelling.

Resounding in its undercover shock value, Swallow can easily be classified as a personalized horror show let alone an effective psychological character study of a delusional woman trying her best to maintain some makeshift order to her creepy escalation of disorder and distress. Consequently, the terrifying Swallow is an involving feminist fable that toils with the inner struggles and toxic meditation of disconnected feminine frustration.