by Jed Wagman
in HE Reviews, Reviews

The incredible animation The Mitchells Vs the Machines from Academy Award winning producers Phil Lord and Chris Miller is getting a nice new release on Blu-ray, DVD and Digital this December. It does feel a bit weird to hear the Netflix tudum sound and to see the Netflix logo on a Blu-ray, but we can make an exception if it means being able to the best film of the year.

The film follows an old-school father and his teen filmmaker daughter Katie and their troubled relationship as the Mitchells go on a cross-country road trip to take Katie off to college. Their drive is interrupted to however by the robot apocalypse that threatens to destroy the world and it’s down the Mitchells- the world’s weirdest family- to put a stop to the this and to save the human race.

Featuring an incredible cast including Danny McBride, Maya Rudolph, Olivia Colman and Eric André, The Mitchells Vs The Machines is the best film of the year and an absolute joy to watch. It’s so deeply funny, has so much heart and emotion to it, incredible characters and an animation style that’s just gorgeous to look at. It’s fun for all ages and is so much fun to watch whether it’s the first time you’re watching it or the fifteenth time.

The Blu-ray has lots of special features to it and is a really nice thing to own for fans of the film. To fit in with Katie Mitchell’s film loving energy, the Blu-ray’s menu is laid out like a Criterion disc with it saying “The Katie Collection” with the menu options in a the bottom left corner.

The most exciting part of the Blu-ray is the extended edition of the film titled “Katie’s Extended Cinematic Bonanza Cut!” with over 40 minutes of deleted scenes. There is a little note at the start of the extended version warning that because it’s an animated film and because many of these scenes got cut at different points along the way some of the scenes aren’t fully finished and are in a very basic storyboard format and some of the voices may not be done by same actors that voiced the characters in the film as that scene never got to be recorded by them.

Whilst it is exciting to see many of these deleted scenes and there are some very good and very funny scenes in there and it’s a shame many of them got cut, this can be a bit disorientating switching between the nice, clean, finished animation and the storyboards. It’s definitely not a good idea to watch this extended version if you haven’t seen the original theatrical cut. However, if you have seen the original cut and are a fan then there’s plenty to enjoy in the Katie Mitchell extended cut.

There are also some other good extras on the Blu-ray including “Dog Cop 7: The Final Chapter”. This mini-movie is meant to be one of the shorts that Katie made when she was younger and it’s a really fun little film that makes Katie and her shorts seem even more real. The Blu-ray is packed full of exciting special features like this to make it worthwhile. 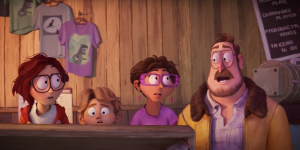 The Mitchells Vs The Machines Blu-ray and DVD Bonus Features:
• Katie’s Cabinet of Forgotten Wonders: Take a rare look inside Katie Mitchell’s filmmaking process as she gives you an exclusive look into how the movie was made.
o Katie Vision!
o Dumb Robots Trailer
o The Original Mitchells Story Pitch
o The Furby Scene- How? Why?
o PAL’s World

• The Mitchells Vs. The Machines: Or How a Group of Passionate Weirdos Made a Big Animated Movie Go inside the story of The Mitchell’s vs the Machines and meet a group of first-time filmmakers & talented cast who banded together to take a collective risk on making a unique, original, and totally off-the-wall film about an everyday, epic, world-saving family
• How To Make Sock Puppets: Katie Mitchell opens the door to her film school. Learn how to make sock puppets who could be extras in your next short film!
• How To Make Katie Face Cupcakes: Enjoy making cupcakes only a mother could love.

Exclusive Blu-ray Bonus Features
• Dog Cop 7: The Final Chapter: Katie Mitchell is back and creating the most hilarious film of her young career – check out an all-new mini-movie, Dog Cop 7: The Final Chapter. In a world where the holidays are being haunted by the Candy Cane Kidnapper, there is only one Dog with the skills to solve the case.
• Katie’s Extended Cinematic Bonanza Cut! Prepare to witness Katie’s director’s cut, an extended version of the original film with over 40 minutes of deleted scenes.
• 8 Deleted Scenes: Get more Mitchells with over 20 minutes of Deleted & Extended Scenes.
• Filmmakers’ commentary
• Plus a limited insert booklet “Director Notes: Inside the Mind of Katie Mitchell” Fun and colourful, check out the hilarious film essay from the mind of Katie!

The Mitchells Vs the Machines is available to buy or rent on Digital, Blu-ray and DVD from 14th December.